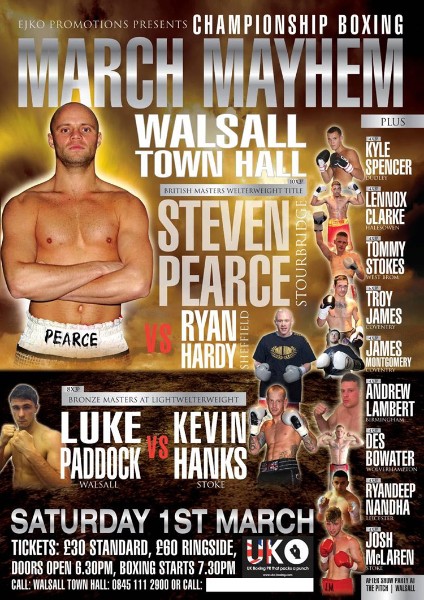 The show, on Saturday, 1st March, is headlined by a British Masters Title fight and an International Bronze Masters showdown plus a nine-fight undercard.

Stourbridge’s International Masters Welterweight Champion, Steven Pearce, will be looking to add the vacant British Masters strap to his list of titles when he takes on Sheffield’s Ryan Hardy.

28-year old Pearce recorded a stunning victory at Walsall Town Hall last November with a fifth round knock-out of Stafford’s Rob Hunt to lift the International Masters belt. Hardy on the other hand will be looking to bounce back from a first professional defeat in his last outing. The 27 year-old had recorded six straight victories before suffering a points los at the hands of upcoming prospect, Nathan Dale, also in November.

Walsall’s Luke Paddock goes in search of Bronze Masters honours when he steps in with Stoke’s Kevin Hanks. The hometown light welterweight prospect has recorded five straight victories since turning professional in 2012. At 27, Hanks is five years Paddock’s senior. The Stoke scrapper has tasted defeat four times in his six-fight career but won on his last Town Hall outing – a points victory over Sid Razak last September.

“I’m delighted to be putting another show on in Walsall,” explained Promoter, Errol Johnson. “It’s a great venue and it’s matched with a stacked card. We’ve got nine fights, including two titles on the line, so it will be another great night of Midlands boxing.”

Coventry’s Midlands Area Super Featherweight Champion, Troy James, is chief support on the undercard as he looks to keep himself busy in 2014 following his successful British Eliminator fight at the Town Hall last November.

Dudley light middleweight, Kyle Spencer, will be looking to put a frustrating year behind him with a more active 2014. ‘The Style’, unbeaten in his opening six professional fights, started 2013 with a bang by recording a first round KO victory over Jimmy Price. However, due to a number of postponements, he was only in action once more in the whole of 2013 – a hard-fought points victory over Dee Mitchell back in May.

Tickets, priced at £30 and £60 Ringside, are available from Walsall Town Hall Box Office on 0845 111 2900. The aftershow party takes place at the Pitch Sports Bar and Grill on Bradford Street, Walsall.