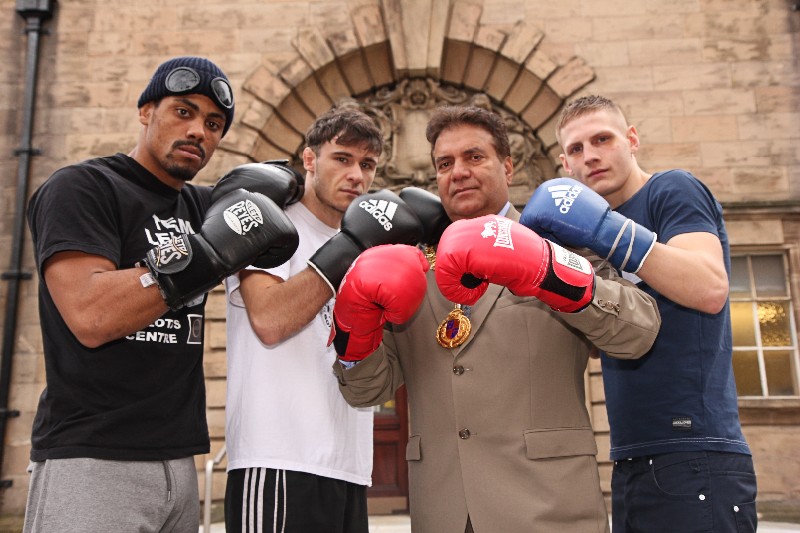 No Excuses For Paddock Despite Late Opponent Switch

Walsall light welterweight, Luke Paddock, insists there can be no excuses should he fail in his quest to be crowned British Masters Bronze Champion on Saturday evening despite a late change of opponent.

The 22 year-old now takes on Gloucester’s Andy Harris at Walsall Town Hall after Stoke’s Kevin Hanks had to pull out of the clash following the removal of a cyst.

The former Priory Park ABC fighter warmed up for Saturday’s show by visiting the Town Hall yesterday and meeting the Mayor of Walsall – Mohammad Nazir – along with fellow boxers Lennox Clarke and Tom Stokes.

A switch of opponent so late in proceedings isn’t ideal but Paddock insists he has enjoyed a near perfect training camp as he goes in search of a first title in just his sixth professional fight.

“Training has gone really well,” Paddock told www.uko-boxing.com. “There can be no excuses as to why I shouldn’t be performing and lifting the title come Saturday night.

“I’ve had a good 8 weeks and apart from a cold early in the camp, I’ve been injury free and feeling great.

“I’ve had some great sparring. I have done a bit with Steven Pearce, who is also fighting for a title on the night, which has been really beneficial to me. Obviously he’s a weight heavier than me so it’s good preparation. I’ve also sparred with Lee Glover who is preparing for an English Title shot at super featherweight and he’s brought me on in terms of sharpness.

“Obviously the change of opponent isn’t ideal but I’ve done all my training now and I’m ready to go.

Paddock admits to knowing little about his opponent, whose record stands at 3-10-1. The Gloucester scrapper may be something of an unknown quantity to the Bloxwich boxer but Paddock knows that, with a title up for grabs, and a being a late replacement, Harris will travel to Walsall with nothing to lose and everything to gain.

“I’ve obviously seen very little of Harris if I’m honest,” added Paddock. “He’s bound to be a tough lad and he’ll be coming to win. It’s a big fight for us both. I’m an unbeaten prospect fighting in my hometown and he’s at a stage of his career when he needs to get back to winning ways and take this title chance.

“It’s a Bronze Masters so I’m not under any illusions but it’s the first of many I hope. Being a local lad, I live in Bloxwich (suburb of Walsall) means I’ve sold quite a lot of tickets too. I can’t wait for Saturday now.”

Walsall’s Midlands Area Cruiserweight Champion, Chris Keane, is also in action for the first time since September when he faces Lithuanian, Igor Borucha.