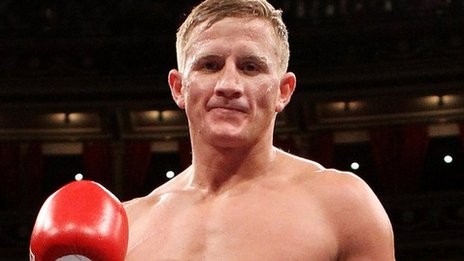 Sedgfield’s Bradley Saunders is to take on Dungiven’s Paul McCloskey on Saturday 29th March, after rumours were confirmed today at a press conference in Newcastle.

This is the biggest test for Saunders’ career to date and will be considered by many as big step up at a very early stage. Saunders has cruised to eight wins in eight so far, bowling over most opponents placed in front of him, achieving a 75% KO ratio.

The former Beijing 2008 Olympian has been looking for a big fight to kick off 2014 with the ultimate goal to challenge for titles this year. Saunders has already taken on other risky fights in his fledgling professional career when he went eight rounds with Peter McDonagh in just his fifth pro outing.

He also took on British Masters Bronze champion Gareth Heard and the current Hungarian lightweight champion Gyorgy Mizsei Jr. Both were stopped midway through the contest in the fourth round after multiple knockdowns.

Flying back from Spain for the press conference, Saunders stated, “I’m excited for this fight. My phone’s been going mad since the announcement – thanks for all the support. I just don’t want to be wrapped in cotton wool, so only eight fights in and this lets you all know that”.

Southpaw McCloskey, boasts an outstanding record of 24 (12) – 3 (1) – 0 and has owned a collection of belts throughout a glittering career.

McCloskey’s fine record also set him up with a world title fight against Amir Khan for the WBA World light welterweight title, a fight that would serve the Irishman with his first defeat in the pro game after an impressive 23 fights.

This sets the scene for the master versus the apprentice match in what promises to be spectacle not to be missed for all boxing fans.

Odds could possibly swing in the favour of Saunders with youth, confidence and power on his side plus with the older McCloskey coming into the fight off the back of a loss and only two wins in the previous five. However, experience cannot be bought and his renowned awkward style and southpaw stance will prove problems for any fighter.

“He thinks he is going to take me in the deep water but I can assure you that he will be the one getting drowned”. Saunders commented.

Regarding the setting of the fight, Saunders confirmed his satisfaction to be appearing in front of his home crowd again. “I always like fighting in the North East. I sold 1,500 tickets last time out, and my following is getting bigger. I want to bring things back to the North East rather than take them away”.

News of this fight has gotten 2014 off to the right start for the County Durham star but what else could be in the pipeline for this year? “I’d like to have four fights this year and I’ve got my eyes on the British title.” Saunders concluded.

The main event between champion Dickinson and challenger Dawson has fight fans divided in what can only promise to be a spectacular event between the two equally matched fighters.

The 27 year old champ is looking to secure the Lonsdale belt outright in this fight after successfully winning the vacant title against Shane McPhilbin, and defending the honours twice successfully against David Dolan and Mike Stafford.

Having sparred Hall as young amateurs, Saunders will also be proud to see him defend his title against Ward. “It’s absolutely a 50-50 fight, but it’s good because no matter who wins the title is staying in the Northeast”.

Frankie Gavin, the British and Commonwealth welterweight king is also in action defending his honours against an, as yet, unnamed opponent.

Yorkshire heavyweight David Allen 4 (3) – 0 – 0 looks to continue his unbeaten rise through the British rankings by reaching a sixth win. Currently four wins from four, this will be the 21 year old’s second fight in the same month as he takes on journeyman Moses Matovu on 2nd March in Sheffield.

Following the success of ‘License to Thrill’ in November 2013, a combined Quensberry Promotions and Wraith Promotions show, this has kicked off a boxing revival in the North East – much to the delight of the wealth of emerging talent in the area.