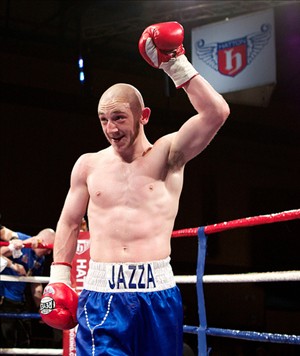 In Depth Q&A with Jazza Dickens

British BoxersMarch 4, 2014
LATEST BOXING NEWSPress Releases0 Comments14 min read
Britain’s 122lb super-bantamweight division is presently awash with world class talent. However, names such as Scott Quigg, Carl Frampton, Kid Galahad and Jamie McDonnell hold no trepidation for 22 year old Scouse southpaw James Dickens. The lad they call ‘Jazza’ served notice of the audacious talent that had long been whispers about on the Mersey grapevine, when he gave the aforementioned Galahad fits for the first nine rounds of their September 2013 British title clash. A lack of experience led to Dickens running out of steam in round ten but the 2010 ABA bantamweight champion provided copious evidence that he has both the talent and desire to rise to championship status now that he has penned a promotional deal with Frank Warren. He begins his comeback in a six rounder with Georgia’s decent George Gachechiladze on the massive bill at Aintree Racecourse in his home city on Saturday 8th March.