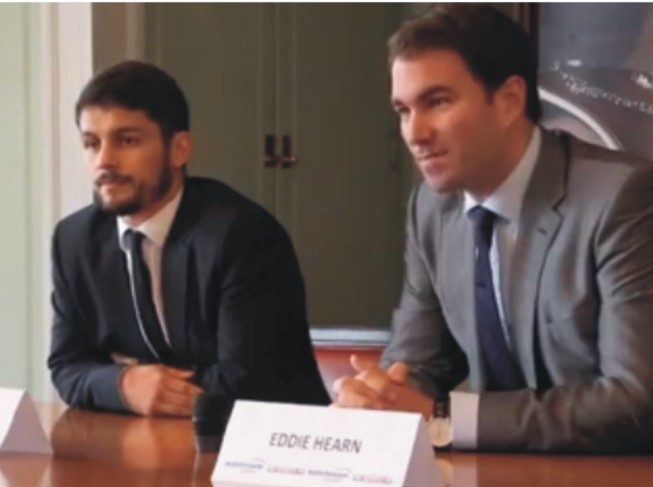 Smith (17-1, 10KOs) joins his brother, Callum, who is already with Matchroom and is the current English super-middleweight champion unbeaten in 8 fights, with 6 KOs.

Smith, 28, will make his debut for Matchroom on the undercard of Carl Froch vs George Groves on November 23, in Manchester where he will defend his Lonsdale belt against former holder Gary Sykes.

“It gives me great pleasure to announce our latest signing to the Matchroom camp, British super-featherweight champion Stephen Smith, the latest addition to what some are calling, the most exciting stable seen in world boxing.” said Eddie Hearn when announcing Smith today at the press conference at Trinity House in London.

“I’ve been watching Stephen with interest over the last period and of course his fight against Gary Buckland which was hugely impressive and I believe he was the underdog going into that fight, but looked fantastic in scoring a KO victory.

“We work with his brother Callum who is producing great things as well,” continued the promoter.

“Stephen will be boxing on the Carl Froch vs George Groves card on November 23rd, we have an obligation to defend his British title against Gary Sykes which were happy to do so and have been speaking to the Board (BBBofC) about.

“He is also rated No9 with the WBC and No11 in the WBA and 11 in the WBO, so we have world title business to deal with and our aim is to get Stephen Smith a shot at the world title in 2014, so beyond Sykes there is other business to deal with, but we believe the Sykes fight is a good fight and were willing to accept that challenge and hopefully get that made on the Froch-Groves card at the M.E.N.” added Hearn, who then passed over to his new recruit ‘Swifty’

“I’m looking forward to pushing on with my career.” said Smith at today’s London Presser.

“The Sykes fight comes next and it is a fight I’m really looking forward too, it is one I would have picked has a voluntary if it wasn’t my mandatory, because styles make fights and it is a good fight stylistically for me , so I look forward to the fight and if the future brings a world title next year I’d be delighted.”

Smith was lined up to defend his title on the Liverpool Echo Arena card on December 7, where he was to make history with his two brothers defending their titles too. He and his brothers Paul and Liam already made boxing history recently, after Paul won the middleweight title and then Liam claimed the British light-middleweight belt, becoming the first three brothers to ever hold the Lonsdale belt at the same time. But it looks like that wont happen after today’s events and that he walked away from his W Promotions contract following the company’s voluntary administration.

Warren though responded by denying that Smith was free to leave him and has promised legal action. This was before today’s announcement and this is what his counter statement had to say in response to Smith leaving his stable.

“Mr. Warren will defend his rights as both the Manager and Promoter of Stephen Smith and a complaint has already been lodged at the British Boxing Board of Control and a letter sent to his solicitors. Other parties, who we are aware have induced Mr. Smith to breach his contract and in doing so have tortuously interfered with Mr Warren’s rights, will also be the subject of action through the BBBofC and the Courts.”

We are not sure about the ins and outs of this promotional stuff, but all we know is that Stephen Smith is a class boxer and we look forward to seeing him in the ring soon. The fight against Gary Sykes is a good match-up and a fight we are looking forward too. It is a shame we may not now see all the Smith brothers on one show as champions though!

Continue to the next page to read the full statement from W. Promotions..