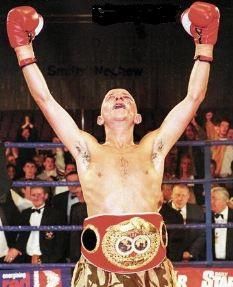 Former IBF world featherweight champion Paul Ingle from Scarborough speaks to BritishBoxers about his amazing boxing career and the key fights that saw him claim British, Commonwealth and European titles before beating Manuel Madina in November 1999 to lift his first world title belt, the IBF.

Paul went onto add ‘Poison’ Junior Jones’ IBO belt after he stopped the New York boxing legend in his home town at Madison Square Garden in April 2000. Paul lost his world title later that year when in December he was stopped in the last round after collapsing and falling into a coma against Mbulelo Botile. Paul was to have an operation to remove a blood clot from his brain, but the hunter survived, but his life has a boxer was over.

That was 13 years ago and Paul still remembers his career in fine detail, from the first time he went down to the gym as a boy, after being influenced by an uncle who boxed. He says he came home and cried the first few time he went to the gym, but stuck at it.

As an amateur Paul boxed for England , he was a world junior champion and represented Great Britain at the Barcelona Olympics in 1993, losing to the eventual gold medal winner in the second round, by just one point.

Turning professional after his amateur grounding, In two years he became the proud owner of the Lonsdale belt after stopping former world champion Colin McMillan to become British champion, one of his proudest moments, that he says he did for his mam.

Paul went on to win the Lonsdale belt outright, after stopping Billy Hardy, also taking Commonwealth and European titles back to his seaside home. The Yorkshire Hunter’s first world title crack came when he challenged Prince Naseem Hamed in Manchester in 1999, just before his second shot at Madina. Hamed stopped Paul in the 11th round, but not after the Hunter had given Naz his toughest fight, breaking his nose and pushing the champion all the way in a great fight.

I was always a big fan of Paul Ingle and when the chance to go and meet him and do an interview with him in his home town of Scarborough  it was a great opportunity to take a trip down memory lane and to go back to the days when ‘The Yorkshire Hunter’ ruled the British featherweight division and became one of the most exciting world champions of the era.

Since Paul’s accident in his last fight, I’d heard news of his recovery, but not much about his boxing career and he was remembered for that tragic fight and his battles with life after boxing. I wanted to see how Paul was and talk to him about boxing and the highs! He still loves the sport and says he would fight again if he could! – Paul Ingle for me isn’t just remembered for that tragic night against Botile in Sheffield, Paul Ingle will always be remembered for what he achieved and his name will be forever held in the pugilist history books.

Remember his classic war with Colin McMillan? A fight that would live in any time. Or the battle he gave the Prince, when Naz was primed and at the top of his game. And the ultimate night when the Hunter held aloft that IBF title, after outpointing Madina in a fight that still holds a record for the most punches thrown in a world title fight.

And can any British boxing fan forget the night when in the first defence of his title, took on IBO champion Junior Jones in a unification fight. Ingle walked Jones down that night and didn’t give him a second, before overwhelming and stopping him in the 11th round to become a two time world title holder.

Paul talks to BritishBoxers about these fights and more in this in-depth exclusive interview with ‘The Yorkshire Hunter.

This is the first part of my video interview with Paul, Part Two will follow shortly, please enjoy this afternoon with Paul Ingle on a wet windy day in Scarborough by the sea and a take a look back with Paul at the key fights and moments that shaped the career and life of this British boxing hero.