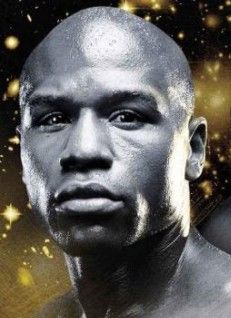 Pound for Pound world No1 Floyd ‘Money’ Mayweather is planning to fight in Britain inside the next 18 months according to his adviser Leonard Ellerbe, and Amir Khan could be the British boxer that Mayweather is being lined up to face, possibly at a British football stadium.

The unbeaten WBC welterweight champion, Mayweather, 36, first puts his title on the line against the tough Californian Robert Guerrero on Saturday night in Las Vegas, where he bids for his 44th career victory. The fight with Guerrero is to be shown live and exclusive on BoxNation (Sky Ch. 437/Virgin Ch. 546).

A fight with Bolton’s Amir Khan, the former light-welterweight world champion, would be a massive event in the UK and Mayweather who has a big British fan base is relishing the opportunity to perform in-front of them. Khan is ranked the No2 contender for the unbeaten American superstar’s title, which would put him in position. Khan has recently been ranked high in the welterweight rankings, which could prompt a potential meeting.

“Floyd cannot wait until we can come over there and give the UK fans a big, big fight.” said Mayweather’s adviser Leonard Ellerbe.

“Floyd has a tremendous fan base in the UK and we’re looking at working on something now where he’s going to come over there.

“Ever since the Ricky Hatton fight back in 2007, UK fans have been very loyal to Floyd and he definitely acknowledges that and he wants to bring a big, big event to the UK.

“There’s definitely a very strong possibility that Floyd will fight in the UK. We’ll see how this thing plays out, his focus is Saturday night and then we’ll go from there. But we’re definitely going to bring a big, big event to the UK.”

Mayweather plans to start the build-up to a major British fight with a tour later this year where he’ll meet fans and make high profile TV appearances.

Ellerbe told Bunce’s Boxing Hour on BoxNation: “He won’t be over for a fight initially, but we’re going to come over there and do some stuff.

“I’m talking with a couple people now and they’re giving me some options, and Floyd will definitely be coming to the UK.

“The UK are his biggest and best fans. He has tremendous love affair for the UK fans.”

Mayweather v Guerrero is live and exclusive on BoxNation (Sky Ch. 347/Virgin Ch. 546) with coverage starting on Sunday morning from 1.30am. Join at www.boxnation.com