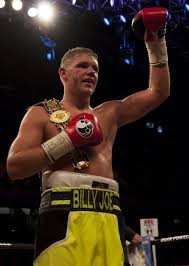 Middleweight star Billy Joe Saunders has been given a starring role on the undercard of the big heavyweight rematch between Dereck Chisora and Tyson Fury on Saturday 26th July at the Phones 4 U Arena in Manchester.

The undefeated Hatfield fighter will feature as chief support on the huge night when he collides with unbeaten Italian Emanuel Blandamura with the Vacant European title on the line, live and exclusive on BoxNation (Sky Ch. 437/HD 490 and Virgin Ch. 546).

Saunders, who already holds the British and Commonwealth titles, aims to win the European crown to complete the ‘big three’ belts, before stepping up to challenge for a world title and achieve his dream of becoming the first world champion from the travelling community.

The 24-year-old hot-shot will also complete another remarkable treble by beating Blandamura.  He will have claimed the scalps of three unbeaten fighters in a row after beating Irishman Gary O’Sullivan and big London rival John Ryder last time out.

Blanda hasn’t lost in 22 fights and has won the WBC’s Mediterranean and International Silver titles, plus the European Union belt which he won in Germany in his last fight on points against then unbeaten Marcos Nader.

And Saunders has a warning for his Italian rival.

“I’m going to do a real good job and smash Blandamura up to win the European title,” Said Saunders.

“He’s standing in the way of my dreams of completing the three big belts before I go for the world title and I’m not going to let him do that,”

“My promoter Frank Warren has done a fantastic job of getting me the title opportunity at home and it’s down to me to do the business on the night and win the belt,”

“It just proves the quality of fighter I am to have already beaten two fighters in a row with unbeaten records and now I’m going for a third against Blandamura.  Bring them on, the more undefeated fighters I face the more my reputation grows and the better I perform,”

“I don’t doubt that Blandamura will be well up for the fight and will fancy his chances over here against me.  He travelled to Germany and beat Nader, and to win on points in Germany is a big feat in itself so he’ll be confident of doing the same to me over here,”

“But he’s facing Billy Joe Saunders and I’ll guarantee he’ll never have faced anyone like me in his career.  My hand speed will be too fast for him, I’ll have too many angles and moves for him and I’ll hit too hard for him as well,”

“This is the biggest night of my life on one of the biggest stages in boxing and I’ll be ready like never before.”