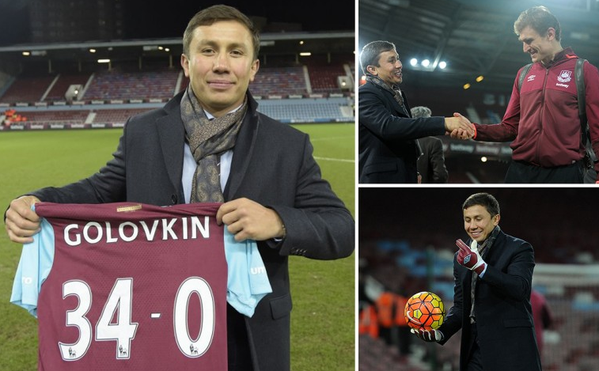 Is Golovkin In London For Contract Talks?

Gennady Golovkin (34-0-31KO) was in London over the weekend being lorded over by West Ham United. GGG was seen signing autographs for the players and fans alike and was given a warm welcome by everyone at the club.

The fearsome Kazakh fighter who is P4P one of the hardest punchers in the game, sparked rumours that he was in the capital to persuade Billy Joe Saunders to sign a contract for a unification fight sometime this year.

Frank Warren had received an offer at the beginning of the month from Tom Loeffler, (Golovkins promoter), which was in the region of £2,000,000 but the sum was nowhere near enough for Saunders to put his WBO belt on the line. With the Englishman from Hatfield wanting in the region of £4,000,000.

IBF and WBA champ Golovkin will have to renegotiate terms for this mouth-watering contest or forget about Saunders and move onto Saul ‘Canelo’ Alvarez, which would be a very dangerous fight for him. The flame haired Mexican would show little fear against the unbeaten Kazakh.