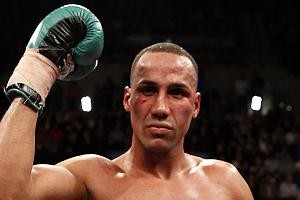 In reaction to James DeGale’s sudden departure from his contracted promotional banner, Hennessy Sports have released an official statement regarding the matter. The press release is followed:

London (April 9) Hennessy Sports confirms that at the end of last week James DeGale terminated his Promotional Rights Agreement with the company. The contract was due to run for several more years.

DeGale has been exclusively promoted by Hennessy Sports since September 2012 and in that time has successfully fought six times, all of his UK bouts having been broadcast under the “Hennessy Sports” banner live on Channel 5 including his successful challenge for the WBC Silver super middleweight title.

Following his run of successful bouts and under the promotional guidance of Hennessy Sports DeGale had recently been made mandatory challenger for the prestigious WBC world super middleweight title and had also been named in a final eliminator to become mandatory challenger for the prestigious IBF world super middleweight title, a path that would have led to a domestic super fight against the winner of Carl Froch and George Groves.

Mick Hennessy commented: “We are extremely surprised and disappointed that DeGale has terminated his long term contract with us. The agreement had several years to run and we had put him into an excellent position on the world super middleweight stage. Unfortunately the company has been given no alternative but to put the matter into the hands of its lawyers and we are currently considering our legal options against DeGale. We are also extremely concerned about the possible involvement of any other parties in DeGale’s decision to terminate our contract and if necessary we will take the appropriate legal action against any other promoter, broadcaster or sanctioning body that is found to have been involved in this decision.”

No further comment will be made by the company on this issue whilst it considers its options.

Following is an excerpt from the statement that Ambrose Mendy, James DeGale’s advisor, released last week on behalf of the Harlesden southpaw:

‘Mick Hennessey is no longer authorised to make representations of any kind on behalf of James DeGale…is now and at all times hereafter free to negotiate with any of the licensed operators in the International arena of boxing business.’

The best thing that DeGale could have done for his career was to put himself back on the market, and there is much speculation that Matchroom Sport will snap him up. ‘Chunky’ has been with Hennessy Sports since splitting with previous promoter Frank Warren, and despite being the current holder of the WBC Silver super-middleweight title and being worked into mandatory positions with both the IBF and WBC governing bodies, Mick Hennessy has arguably failed one of the top active British boxers.

I have cried out in previous articles that no Olympian, especially a gold medallist, should be swept under the carpet and kept quiet; with DeGale fighting in shopping centres before a live audience of perhaps only a couple of thousand strong and broadcast on terrestrial television (Channel 5), that is seemingly how he has been treated.

The Daily Mail have expressed that there are motivational issues for DeGale’s team in terms of the lack of competitive opponents that Hennessy have matched against ‘Chunky’, and one only has to look at his record of opposition since the 2011 fight against George Groves to understand their concerns.

DeGale certainly needs to have some competent and dedicated assistance that can propel him into the mix with the super-middleweight elite, and there are other promoters besides Matchroom which can promise success, although he would probably have to leave Britain. There is of course the American route, seeking to join the likes of Britons Amir Khan and Anthony Ogogo at Golden Boy Promotions, where DeGale’s personality and fighting style would undoubtedly be welcomed, or it may be worth investigating the path Martin Murray took in signing up with Africa’s largest promoter, Golden Gloves, given the strength of commitment that they promise their fighters.