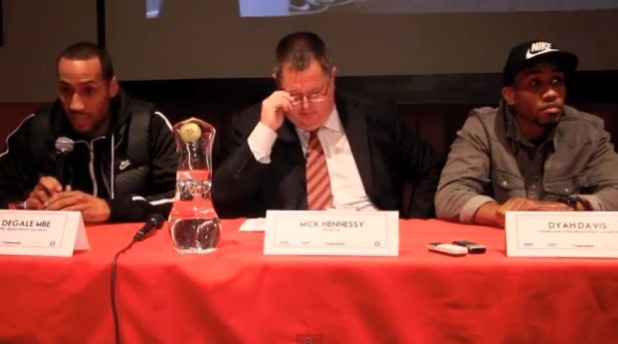 Fight Report: DeGale to take his frustration out on Davis

James DeGale will defend his WBC Silver super middleweight title against Dyah Davis on Saturday night and expects to take his frustration of not fighting regular and not having boxed for a world title out on his American opponent at the Blue Water in Kent.

DeGale, 27,  is desperate to get into the world title fight and has asked his promoter Mick Hennessy to make it happen for him, but he must first get through Davis on Saturday before he can look ahead.

“I need to box more regularly and I need these big fights now because I am frustrated.” said DeGale

“It’s not about treading water any more. It’s about getting in there for meaningful fights as I head for a world title.

“So, no pressure on Mick, but he needs to get me those fights. I am frustrated, so I will be taking out my frustration on Davis.”

DeGale, whose only defeat in his 17 contests was to world title challenger George Groves, believes he is now in the right position to contest a world title.

“After this fight, I need to step it up. I need to move on because I’m ranked highly with all the organisations. I need to start making moves now.

“I’ve had some good learning fights and I’ve had eight 12-round fights. I need to box for a world title now.”