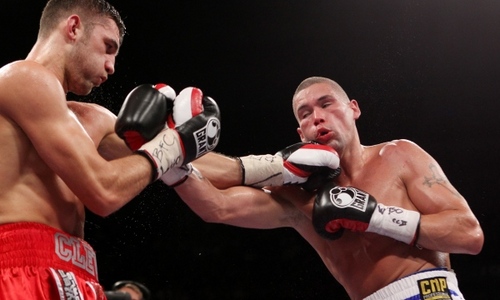 Cleverly says a rematch with Bellew is inevitable

Cleverly: I will make it 2-0 against Bellew

Nathan Cleverly says a rematch with bitter rival Tony Bellew is ‘inevitable’ as he prepares to make his debut at Cruiserweight on Saturday night, live on Sky Sports from the Motorpoint Arena in Cardiff – and he’ll repeat his win when they meet again.

Cleverly faces Trinidad’s Shaun Corbin in his first fight at 200lbs and lands in the division two months after Bellew made his bow at the weight, stopping Valery Brudov in the 12th round at the Echo Arena in Liverpool.

That was the venue in October 2011 where Cleverly defended his WBO Light Heavyweight title against the hometown favourite, retaining the belt against his bitter foe with a majority decision.

Both men have trod a different path since but as the look to bounce back from World title reverses, Cleverly believes they are destined to renew hostilities later in the year to get back into the World title mix.

“We’re in the same division and have the same promoter now so it’s inevitable,” said Cleverly. “The first fight was a cracker and people want to see the rematch, so it makes sense now. We’re building it up nicely and when he got by that right hand by Brudov in the seventh round I was thinking ‘please don’t go over’, because I want the rematch.

“If he keeps winning and I keep winning, we’re going to get it on, there’s no doubt, we’re on a collision course, its 1-0 to me and I’m looking forward to making it 2-0.

“I am 6ft 2in and Tony is tall too, so getting down to the weight is tough. It’s good that Tony is in the division, the more competitive fights and big names in the division the better it is, the first fight was good, the second fight is likely to be good, and with the same result.

“He looked powerful against Brudov, he took him out and he was a game guy but Tony knocked him off his feet three times and showed good power. Brudov had a bit of pedigree and was going to give Tony a fight, it’s the Russian’s instinct to fight but he was there to hit and he was made for Bellew.

“We know how much fight fans love domestic rivalries, and me and Bellew we don’t like each other. That’s a good selling point but we can both fight and it will be entertaining and I’m looking forward to doing the business again.”

Cleverly’s clash with Corbin is part of a huge line-up of action in Cardiff with Featherweight star Lee Selby tackling Mexican Romulo Koasicha in a WBC title eliminator.