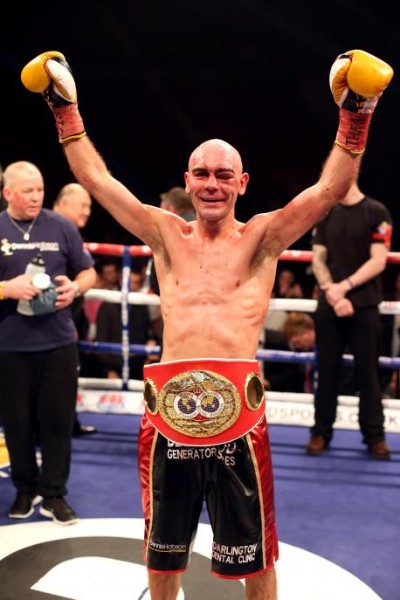 Hobson promising ‘Fight of the Year’ in Newcastle

Promoter Dennis Hobson is promising Newcastle the sporting event of the summer when Stuart Hall returns to the city’s Metro Radio Arena on June 7 to defend his IBF world bantamweight title.

In March, Hall made a successful maiden defence of his crown at the Arena after County Durham’s Martin Ward was pulled out of their contest in the second round due to a severe gash.

Now, with ‘Stuey’ about to face the challenge of Ellesmere Port’s unbeaten Paul Butler, Hobson is convinced that the North East is about to witness a potential ‘fight of the year’.

Darlington’s Hall, 34, is the come-forward, aggressive puncher who wrenched the vacant belt from South Africa’s Vusi Malinga in an epic encounter last December.

Butler, meanwhile, has rightly earned his reputation as a prodigious talent after racking up 15 wins, with 8 KOs, since turning over in 2010.

With a fascinating mix of styles, along with some genuine friction between the pair, the fight has all the potential to become a British boxing classic.

Read more from Hobson ahead of the contest:

How much are you looking forward to returning to Newcastle?

I’m buzzing about it.  It’s a hotbed of boxing and I think it’s been untapped for a few years.  The passion you get is incredible.  There’s a queue [of boxers] wanting to get on every show and that makes our job easier.  And again, like last time, there’s a clamour for tickets.

We’re putting a meaningful fight on for a genuine world title.  It’s a genuine 50-50 fight and I’m really pleased we’re going back because I enjoyed it last time and I want to keep going back.  People say ‘is boxing dying’, but when you get that big fight atmosphere, there’s nothing like it.  We got that last time and it’s a shame the main fight didn’t take off because of the bad cut.  But the occasion and the atmosphere we put together was something special and I’m sure we’ll get it again on June 7.

What are your thoughts on Paul Butler as an opponent?

It’s a genuine 50-50 fight and it’s about who can impose their style on the contest.  Paul’s slicker, got a better variety of shots and is a great mover, but Stuart’s got the leveller.  Out of the two I’d say Stuart is the heavier hitter and it’s just whether he can get to Paul.

They’ve sparred before and there is friction between the pair – will this make for a better fight?

I think so.  I’ve seen them spar but I don’t think that counts for a lot because they’ll both have held back and you can’t read too much into it.  They know each other’s styles but I think it’s more of an even fight than some people think.

I think it’s a great fight for the crowd, and the viewers win.  Obviously I’m in Stuart’s camp and I think it’s a pick ‘em fight, but I sway towards Stuart because I think he could be too strong.

But I do rate Paul’s talent; I think he’s a class act but it’s just whether this is a little bit too soon.  I think Paul will eventually become world champion but I think Stuart might be too strong and hit too hard at this moment in time.

Who stands out on the undercard for you?

We’ve got Jon-Lewis Dickinson and Bradley Saunders who we’re going to build.  Jon-Lewis already holds the Lonsdale Belt but we’re going to try and take him onto the world scene because I think there’s a couple of champions that Jon can trouble.  If we can position him right and get the right fight at the right time then I think he can go on and win a world title.  Also on the bill will be the likes of Kirk Goodings defending his English title, local talents like Josh Leather and Tommy Ward, as well as heavyweight Dave Allen, and others to be announced soon.