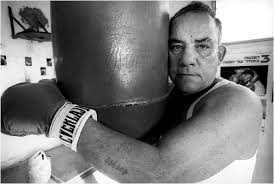 In a smoke-filled warehouse a 5’6″, 135lb man has just fought and beaten an opponent 6’4″ tall and almost twice his weight. The bigger man lies on the floor out cold. There is laughter, shouting, and eventually a couple of men in uniform drag the unfortunate loser outside. There is a gunshot. The winner, Salamo Arouch, is slapped on the back by the men who bet on him and ordered back to work. It is 1944, and this is Auschwitz, the most notorious of the Nazi death camps.

Arouch was born in 1923 and grew up in Thessalonica, Greece. A small child, he was encouraged by his father to take up boxing and won his first fight aged 14. By the early throws of World War Two, Arouch had become the Balkans and Greek Junior Middleweight champion and was nicknamed “The ballet dancer” because of his fancy footwork. He was talented and young, a heady mix, and Salamo had much to look forward to in life.

Everything changed in May of 1943, when the Germans marched into Thessalonica and rounded up Arouch and an estimated 47,000 other Jews, transporting them by rail in cattle trucks to death camps in Germany and Poland. Salamo and his family arrived in Auschwitz, tired, scared, and split up from each other. After spending a day standing naked, Salamo was disinfected, shaved and made to line up with the other new arrivals. A German officer pulled up in a car, got out, and asked the arrivals if any of them were boxers or wrestlers. Arouch put his hand up but had trouble convincing the officer he was really a boxer because at 5’6″ he was so small. So the officer drew a ring in the dirt and told him to fight another prisoner. The fight lasted 4 rounds and Arouch won. He was entertaining. It was the beginning of the most incredible story in boxing history.

Because he was now useful for entertaining the Nazi guards, Salamo was spared death or hard labour – unlike his brother, who was eventually shot for refusing to pull out the gold teeth from victims of the gas chambers, and his parents, who were gassed on arrival. He worked as a clerk in the camp, but every Sunday and Wednesday evenings he would be led to a warehouse and told to fight whomever the guards chose – usually another prisoner. The loser, in Salamo’s words, was “Left weak. And the Nazi’s didn’t tolerate the weak, they shot them.” He went into each fight knowing that losing meant almost certain death.

Salamo Arouch took part in over two hundred fights in Auschwitz, not losing a single one. It’s a staggering feat of human endurance in a place where the word “horror” doesn’t adequately sum up even the mundane. Think about that for a minute…..over two hundred fights against mostly bigger men, knowing if you lose, you die. It’s a concept I can’t think of rationally, I’m sure you can’t either.

Arouch survived Auschwitz, eventually being moved to Belsen and liberated by Russian Soldiers on the 27th of January 1945. He lived the rest of his life quietly, running a small company, training young boxers, and devoting his time to his community, eventually passing away in 2009 at the age of 86 in Israel.

“What kept me alive was a burning determination to someday tell the world what I saw at Auschwitz” he said of his time there, “I am sure I had moments where I wanted to die, but being here now to tell of what happened makes me feel good about being alive.”