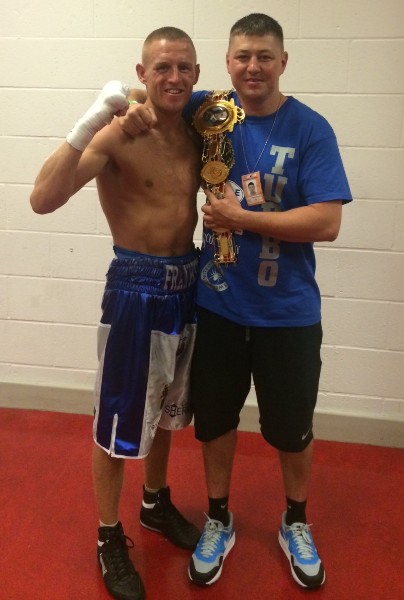 Terry Flanagan and coach Steven Maylett with the Lonsdale belt

Terry ‘Turbo’ Flanagan became the British lightweight champion on Saturday night at the Phones 4U Arena in his home city of Manchester when he stopped former champion Martin Gethin at the end of the 7th round. Gethin was pulled out by his corner after the fighter had suffered a swelling to his right ear and Flanagan s big left hooks left him in excruciating pain every-time they landed.

Unbeaten Flanagan, 25, claimed the coveted Lonsdale belt in his 25th fight, his 25th win and in doing so realised his boyhood dream. It was a sweet performance from ‘Turbo’ from the opening bell he out punched and outclassed the experienced Gethin, who just couldn’t live with the rampant determined Mancunian.

Flanagan’s boxing skills and speed of foot and hand have been in evidence throughout his career, those close to him, people who know what they are talking about have raved about the shy quiet lad, who loves to train, loves to learn, loves to fight and refuses to lose, all the ingredients needed to be a successful pugilist. The proof though was in the pudding, even Flanagan himself knew until he proves himself in the ring against top opposition then ‘it’s no use in shouting me mouth off’ he’d say. Against Gethin a seasoned campaigner, he went some way to proving that the predictions of success are valid.

The way Flanagan took Gethin apart was highly impressive, Flanagan was the former English champion at super-featherweight, but looks much stronger and fitter at lightweight now. He won the Prizefighter lightweight trophy going in the three fights on the night with an injured back. At some points Flanagan’s back problem have effected training camps and he has gone into many fights suffering pain and movement restrictions. It is something he and his coach Steve Maylett have never mentioned to the press and have asked me in the past not to mention it in any of our interviews, they are not the type of folk to make excuses and have people feeling sorry for them.

There is no problem mentioning the bad back now because the problem is healing up well after Terry employed the services of physio Val McCarthy and he has gradually helped the boxer tremendously. The fact Terry has grown and matured physically over the last couple of years has also naturally helped the back and against Gethin the boxing public finally got to see a glimpse of what talent and potential he possesses when he performs injury free.

Such was Flanagan’s confidence in his fitness, he was able to stand with the busy Gethin toe-to-toe, happy to sit with his back on the ropes and pick his punches from behind his super tight guard. Flanagan’s accurate shots were slicing Gethin’s guard and he continued to out fight his brave Wallsall opponent who shipped some heavy punishment from Flanagan’s quick fists. The uppercuts from southpaw Flanagan were sickening and the double twist punches to body and head were key.

Going into the 7th round Gethin’s ear was double the size, his eye was cut from a left hook and he had lost every round, it was the right time to call an halt to the fight, Gethin just couldn’t carry on.

Flanagan has waited patiently for his British title shot, it’s taken him 25 fights to get there but the timing although frustrating for him and his team at times, couldn’t have been better, the dream of fighting for a British title coming true, winning it at the Manchester Arena which is a 5 minute walk to his front door in Ancoats and coming out to the Manchester City and his idol Ricky Hatton’s theme song ‘Blue Moon’

Flanagan had picked up the tag of an avoided fighter and he has seen promises of big fights fall through numerous times because some fighters just seen him has too much of a risk. Now he is British champion doors should open for him but after tonight’s performance he wont have many knocking down his door to face him.

Well done Terry Flanagan, Steve Maylett and the team, it is success well earned, enjoy your victory champ. Gethin was as brave as ever and full credit for a solid effort but Flanagan was just too good.

The British title dream accomplished next the world and Las-Vegas.

Flanagan and Maylett celebrate the win