Brook steps up to Middleweight to face Golovkin 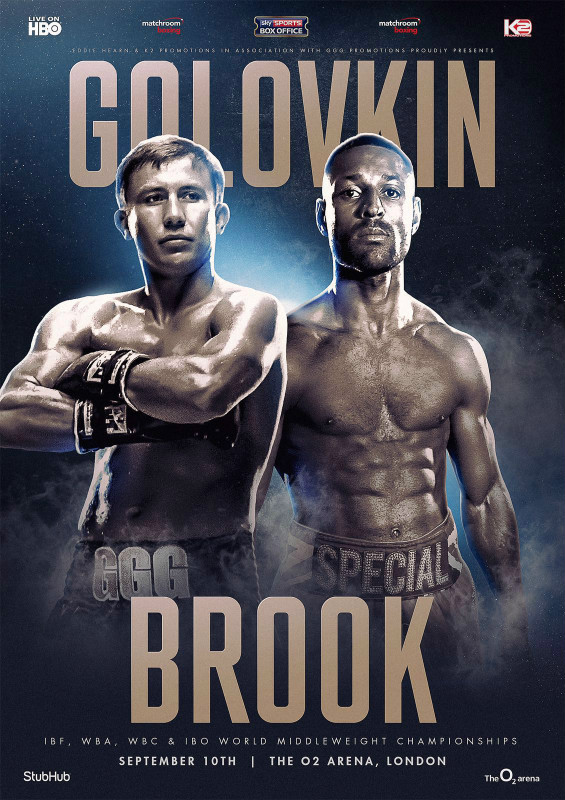 The two unbeaten stars collide in London with the US-based Kazakh KO king Golovkin stepping into the ring as a defending champion for the 16th time and looking to keep up his incredible knockout percentage – with 32 of his previous 35 fights ending early, including all of his World title outings, and the 34 year old is ready to add to that run in his first fight in the UK.

“I’m very excited to be fighting in front of the great British boxing fans and promise another ‘Big Drama Show’ against Kell Brook,” said Golovkin.

Most recently Golovkin has sold out famed venues in the United States, Madison Square Garden in New York City and The Fabulous Forum in Los Angeles.

On October 17, 2015 Golovkin knocked out IBF Middleweight World Champion David Lemieux at Madison Square Garden in front of 20,548. Most recently, Golovkin stopped undefeated mandatory challenger Dominic Wade on April 23, 2016 in the second round at the sold-out Fabulous Forum before a crowd of 16,353.

‘GGG’ has beaten two British fighters already in his career in Matthew Macklin and Martin Murray, but Brook will be out to take his mantel as the World’s most feared fighter. ‘The Special One’ moves up from Welterweight where he holds the IBF title that he ripped from Shawn Porter in August 2014, defending it three times since then with KO wins in all to take his own impressive unbeaten record to 36-0 with 25 wins inside the distance.

Brook – who will retain his status as IBF Welterweight champion – has been hunting a major fight since landing the World title, and the 30 year old believes he has the tools to defeat Golovkin and become boxing’s biggest star.

“This is the fight and the moment I have been waiting for for some time,” said Brook. “We’ve tried and tried to lure the best to come and fight me and now we’ve got the best of the best – the number one pound for pound fighter in the world is coming to the UK.

“When this fight got offered to me I accepted within minutes and I can’t wait. Everyone knows I’m a huge welterweight and I know I will carry my speed and accuracy and even more power through the weights. This is the ultimate fight, one of the biggest international fights the country has seen in many years – you have seen some huge names run from GGG but I’m running to him. I’m a Special fighter and I will show the World on September 10.”

“We’re very excited to have Gennady fight for the first time in the UK,” said Golovkin’s promoter Tom Loffler. “We have a great deal of respect for Kell Brook for stepping up and facing Gennady when so many have been reluctant to do so.

“We look forward to working with Eddie and the Matchroom Boxing team on this huge international fight on September 10.”

“I couldn’t be happier for Kell. We have pushed for that big name for a long time with many reluctant to step into the ring with him and now this is the ultimate challenge, the biggest fight of 2016 and I can’t tell you how happy I am to bring it to the UK. September 10 is going to be an incredible night at The O2 – it’s a special night for British sport and we will provide a packed show with multiple World title fights and some of the biggest names in British boxing.”

Adam Smith Head of Boxing at Sky Sports said: “What a massive announcement! It’s the kind of an astonishing twist that can only happen in our sport. Britain’s longest reigning unbeaten fighter and world welterweight champion Kell Brook moves up to challenge Gennady Golovkin who brings his world middleweight titles to our shores. With 71 wins between them, 57 by knockout and no defeats, it’s a wonderful clash and a huge opportunity for Sheffield’s ‘Special One’. It promises to be another great night on Sky Sports Box Office!”