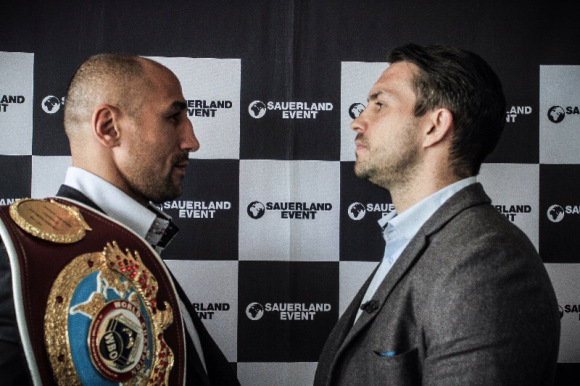 Liverpool’s Paul Smith takes on Arthur Abraham for the WBO super-middleweight title at the at Sparkassen-Arena in Kiel, Germany on September 27, it will be Smith’s first shot at a world title in a professional career that has spanned 11 years.

This promises to be a great fight between two real warriors and it is a great opportunity for Smith to become our latest British world champion. It is a big ask but one that Smith’s desire and passion to become a world champion can see him answer and prevail, but it wont be easy.

Smith is on a four-fight winning streak since being stopped by George Groves at Wembley three years ago, in that period he claimed the British title last summer for the second time with a sixth-round stoppage of Tony Dodson. Smith’s only other defeat came against James DeGale.

German based Armenian Abraham (40-4, 28 KOs), takes more experience into the fight having boxed at a higher level than Smith and he will also have the added advantage of fighting at home in Kiel but with Smith expected to take over 2000 fans over with him to Germany to cheer him on, it might just feel like the Echo Arena for ‘The Real Gone Kid’ come fight night, such is the noise expected from the ‘Smigga’ faithful.

Smith, 31, is under no illusions as to what a tough task lies ahead of him but he has a game plan and is confident of victory and expects a classic toe-to-toe battle with the German. Abraham is not the boxer he was but he is still a world class operator and will be dangerous at all times but Smith (35-3, 20 KOs)  is eager and ready to cease his moment.

“I’m expecting the best Arthur Abraham that there has been on the night,” said Smith

“I think the pair of us are going to come out, meet in the centre of the ring and knock seven bells out of each other.

“That is the style of both of us. That is the way we fight. I think it’s going to make for a classic.

“It’s a dream come true to finally get my chance to fight for a world title.

“Arthur is a great champion, a real gentleman and a brilliant ambassador for the sport. I do believe that our styles will make for a great fight, but I just think that I am getting him at the right time. I know I can beat him and have seen things in him that I can capitalise on. I am sure it will be a spectacular show and I’m proud to be fighting for a World title over in Germany.”

“I would like to thank Team Sauerland and my promoter, Eddie Hearn, for making this happen. I have a lot of fans travelling over to watch me become world champion, and they won’t be disappointed.” added Smith.

Abraham who lost to Carl Froch in 2010 has won his last four fights on points and has hit a good patch of form, since losing his belt to Robert Stieglitz last year, before defeating Stieglitz in March to win it back.

Abraham, 34, has only lost 4 fights of 44, the losses were to world class fighters Froch, Stieglitz, Andre Ward and Andre Dirrell so he doesn’t go down easy and Smith will have to raise his game and dig deeper than he has ever had to if he is to dethrone ‘King Arthur.’

This will be the second defence of the title for Abraham since taking it off fellow German Robert Stieglitz via split decision in their third fight in March. A victory against Smith could set up a potential fourth fight between Abraham and Stieglitz. Abraham is a proud champion and says he wont be fazed by Smith’s travelling army of fans.

“It’s great that Smith is bringing so many fans to Kiel,” Abraham said at the press conference.

“English fans always create a good atmosphere even when they know their fighter will lose.

“This will be my fourth fight in Kiel and my fourth victory.”

Smith can claim a monumental victory here on points but he may have to pull out a special performance and a dominant one to sway the away judges. Good luck Paul British boxing is behind you, bring that belt home.