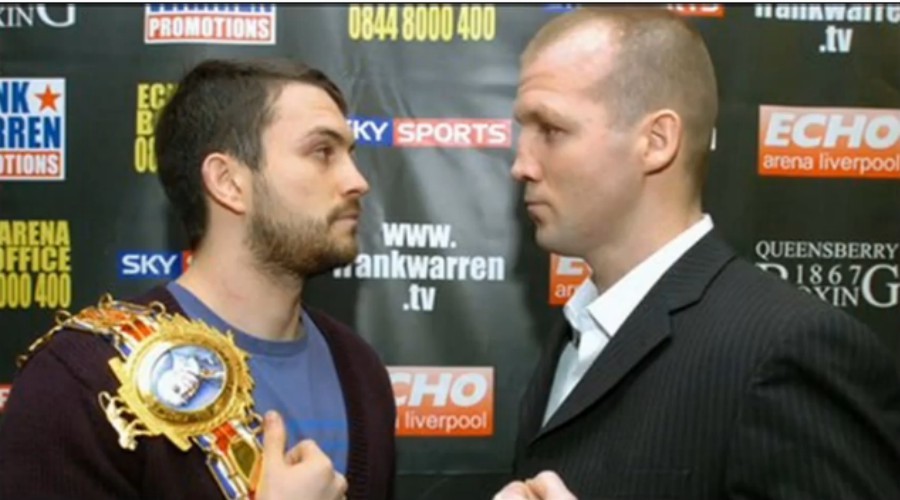 Smith on Dodson Return: ‘Better the Devil You Know’

Paul ‘Smigga’ Smith aka ‘The Real Gone Kid’ will meet old adversary and fellow Liverpudlian Tony ‘The Warrior’ Dodson for the vacant British super-middleweight title on May 31st at the Olympia in Liverpool.
This rematch comes three years after their first bloody battle in March 2010, and this one is expected to be as brutal and passionate as the first.
In the last meeting Smith was the champion defending the same title against a fighter who he regards as a friend, but a sworn enemy when the first bell rang.
Smith and Dodson shared 12 grueling rounds, Smith was defending his crown for the first time and won via a unanimous decision over twelve gruelling rounds in front of a frenzied crowd at Liverpool’s Echo Arena. Smith was cut bad in the first and second rounds and had to fight the whole fight with blood streaming down his face after accidental head clashes. But cutsman Mick Williamson worked his magic and kept Smith in the fight by keeping the wounds from worsening. Smith had to have 20 stitches afterwards but gained the win.
The BBBofC made the British title vacant and sanctioned this return meeting for the vacant belt, following Kenny Anderson’s decision to relinquish the crown because of personal reasons.
Smith, 30, has been on tenterhooks waiting for this announcement and was ready to challenge Anderson; but speaking to BritishBoxers today, Smigga said he is ‘excited’ by the news and is ‘buzzing’ to be facing a familiar face in Dodson.
“I’m buzzing.” said Smith. “Happy to be fighting for British title and regards Tony, it’s a case of better the devil you know.
“I’m excited but I know he’s a good fighter and will be bang up for it because not only is this for the British title but it is also his chance at redemption.
“But I am abetter fighter now and improved totally since joining Joe (Gallagher, his coach) and Dodson will see that, It has all the makings for being another good fight.“
We interviewed Paul on the eve of receiving this news and below is a preview of it, full interview will be available soon on BritishBoxers with updates of the Dodson re-match and Smith’s thoughts on taking on ‘The Warrior’ for a second time and his dream of winning back the Lonsdale belt.
“I’d give anything to be a world champion but to win that Lonsdale belt that’s the first, that’s your pride and joy, your bread and butter that’s what you want when you turn professional to own that belt and win it outright and that is still a dream and that’s what I want.
“I’ve won it, I defended it and I’ve just got to win it again and another defence and it’s mine to keep then.”
pic by Al Stevenson