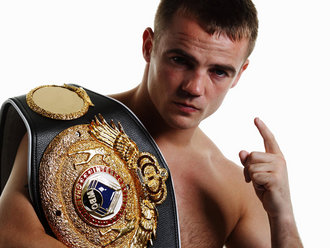 Another fantastic all-British showdown has been added to the big ExCeL show on Saturday 29th November with Frankie Gavin facing-off against rival Bradley Skeete with the British and Vacant Commonwealth Welterweight titles on the line.

Gavin v Skeete will feature on the undercard of the big heavyweight settler between Dereck Chisora and Tyson Fury in the main event, live and exclusive on BoxNation.

Birmingham star Gavin, who will defend his British title and bids to regain his Commonwealth belt against Skeete, returns to action after his close points loss to European Champion Leonard Bundu in August.

“I’m glad Skeete took the fight at last, it’s going to be a thriller on a huge night of boxing,” Said Gavin.

“He’s a good up-and-coming fighter, but I’ll be too much for him in terms of skill and experience.  I commend him for taking the fight against me, but he’s really out of depth in this one,”

“He says he wants it, but does he really mean that.  We’ll see on the night if he wants it more.  I may have lost to Bundu, but it’s made a hungrier and better fighter and I’ll show that against Skeete when I beat him.”

Skeete, who currently holds the WBA Intercontinental title, maintained his unbeaten record on Saturday with a second round stoppage of Brazilian Leandro Mendes Pinto at the York Hall and is relishing his date with Gavin.

“I’m ready for Gavin and I’ll beat him,” Said Skeete.

“This fight has been building up for a while and I’ll will break through into the mainstream with a win over a good champion like Gavin.  This is the fight that will really make my name,”

“I’m unbeaten and I’ll remain unbeaten on the night.”

BoxNation will televise live and excluslive on Sky 437/HD 490, Virgin 546 and Talk Talk 525.  Join at www.boxnation.com. Or watch online at Livesport.tv and via iPhone, iPad or Android.

“Bad Blood” at The Excel Arena on November 29th. Derek Chisora vs Tyson Fury and Billy Joe Saunders vs Chris Eubank Jr. I can’t wait for this. And can’t wait for you all to hear the full undercard on Thursday. Carlsberg don’t do Boxing Shows, but if they did………………. It still wouldn’t be as good as this one. Don’t miss out. – Posted to Facebook by Alfie Warren, Frank Warren’s son.