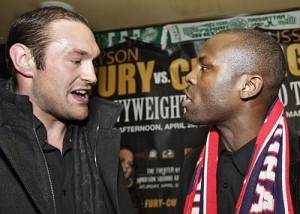 Former two time Cruiserweight world champion turned heavyweight Steve ‘USS’ Cunningham says it was an ingenious move by Tyson Fury and his team to get him in has a sparring partner in preparation for his fight against David Haye at the Manchester Arena on September 28th.

Cunningham, 37, who hopes to be back in action himself in November, has gone from fierce Fury rival to friend and admits to now getting on with Fury and enjoying spending time with him in camp, he is also tipping Fury to defeat Haye in what will be the biggest British heavyweight fight since Lennox Lewis and Frank Bruno fought in 1993.

Initially when he was asked to come over to Belgium to spar with Fury, he says he wasn’t too keen on the idea, considering the intensity of their own fight in April. Cunningham dropped Fury in that fight and was on the brink of causing a big upset in New York. But Fury got up and went on to knock-out the American in round 7.

“Tom Moran called my wife on behalf of Peter Fury, we were on vacation, he was like Peter wants you to spar with Tyson Fury and we were like hell no! What the heck are you serious?” Cunningham explained to www.britishboxers.co.uk

“But then we talked to our team, Naazim and my assistant trainer Buddy and they were like, hey man this is a business. And it helped me get passed what happened between us, which left a real bad taste in my mouth. So it was a mental thing for me and a business move also. But being here and meeting Peter and really getting to know Tyson and Hughie, we’re like close friends now, it’s funny how life goes.” added Cunningham.

“I’m really rooting for Tyson to win, you know we talk about our family, when your in camp with a guy for four weeks, you get to know him, about his family about everybody and i respect that.

” I know its going to be a good fight, David Haye is no push over, not at all, but neither is Fury, it will be a good fight and I’m rooting for Tyson to win.”

To Watch the full interview with Cunningham, where he talks about his fight with fury, sparring him, becoming friends in camp and his own future, plus more, from one of boxing’s nice guys.