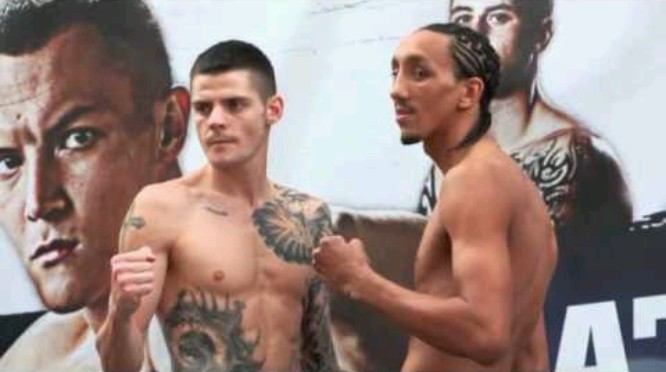 31-year-old Dave Ryan of Derby scored a big upset on last night’s eventful Leeds bill. In a great action fight – perhaps even a domestic Fight of The Year candidate – the warrior known as “Rocky” proved too tough, too determined and too hurtful a puncher for the slick Tyrone Nurse.

Nurse, the younger man by seven years at age 24, had reeled off 7 straight wins since suffering his sole career loss in “Prizefighter,” and he was expected by most to be too slick and too clever for Ryan who, his record suggests, is not in any way a hard hitter. Instead, after shocking his man with stiff and accurate left jabs that scored knockdowns in the 1st and 2nd-rounds, Ryan scored the win of his seven-year pro career.

Both men had their moments in a terrific battle, with Nurse landing some eye-catching uppercuts to the head. Ryan was soon banged up around the left eye, the injury threatening to spoil his chances of winning. But the underdog, urged on by trainer and former heavyweight contender Clifton Mitchell, sucked it up and continued to force the fight. Nurse, who was marked up around the right eye, had to suck it up himself a number of times, and pretty much all night he was welcomed by a telling off by his own corner.

It went down to the wire and at the end both fighters felt they had done enough to win. Ryan prevailed, though, by scores of 114-113 twice, the third judge having the fight all even at 113-113. Afterwards, Nurse spoke of having a rematch, Ryan jokingly said he never wanted to fight Nurse again.

In his last outing, back in December of 2013, Ryan upset former champ Paul McCloskey. Now, with this upset and title around his waist, “Rocky” can look forward to some big fights and some deserved paydays.