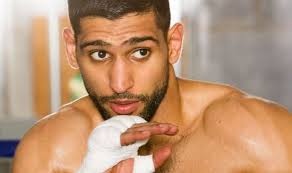 Khan, 28 has failed to secure the mega money clash that he has so publicly craved against the self proclaimed “best ever” with the latter making little mention of a clash with the Briton having not yet announced his last two bouts following his masterful showing against Manny Pacquiao in May.

In a clear display of frustration, Khan commented: “Floyd says he needs an easy fight now because he has proved himself by beating Pacquiao…I think he is messing his own legacy up…I spoke to his father and he says it’d be an easy fight…then why not do it?”

Khan will possibly not have earned much support with fans with his latest sound bite – particularly given the fact that many fight fans feel he is proverbially dodging Sheffield’s Brook in a similar manner.

Khan however has defended his lack of enthusiasm for the match. “Why don’t you fight Kell Brook?…my name’s mentioned among Mayweather and Pacquiao – that’s the level I’m at, let him fight some decent names first and then he can have that decent fight against me”
.
Arrogance? Perhaps. Though such talk be hums of jealousy that the “Special One” is being mentioned as a potential opponent for Mayweather.

The route of humility may be a wise road travelled for Khan. Particularly if Brook secures a lucrative date with the American.

Khan may be in danger of being left behind, a victim of his own self assessment whilst Brook could be catapulted into exclusive company, the Nirvana of the mythical pound-for-pound top table.