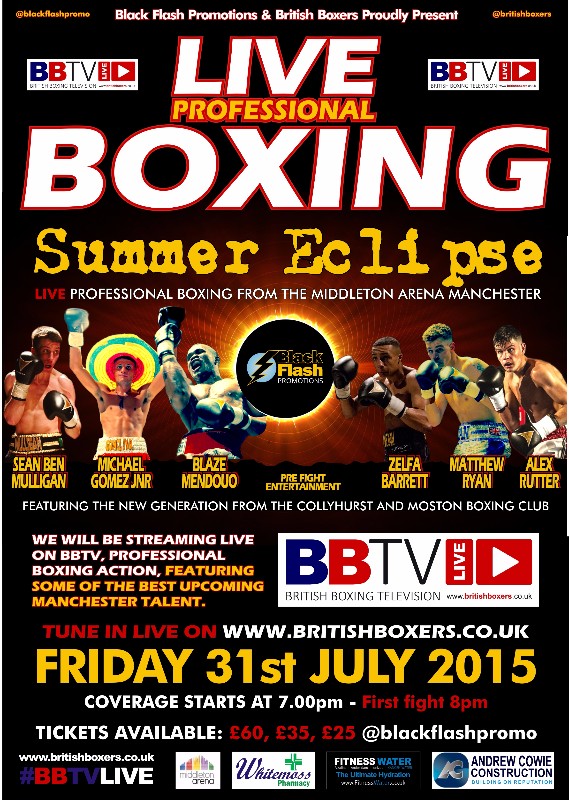 “Big Al” Rutter (7-0) will be introduced to BBTV viewers as he fights on home soil for the first time in his career. Lightweight Rutter’s career sees comparisons with fellow fighter Zelfa Barrett – both men have seen Joe Beedon and Kristian Laight fall foul of their fists. A win for both will heighten the possibility of an attractive future clash between the two men.

Sean Ben Mulligan (2-0-0) will undoubtedly welcome a return to the Middleton Arena, with his professional progress having been stunted by an ear injury. Will his all action style be stifled by the injury in favour of a more cautious approach? Or will Mulligan revert to type as with his last two victorious outings?

Moston’s Michael Gomez Jr (3-0- 1 KO) also features in his second bout under the Black Flash banner. With the proverbial ring rust shaken away against Budapest’s Aron Szilagyi in May, we can expect to see a more settled performance from Gomez this time around, buoyed by the confidence of frequent career activity that an association with Black Flash promotions can bring.

The action, as ever will commence live on online media platform BBTV (British Boxing Television) from 7pm – available LIVE and FREE on www.britishboxers .co.uk.

The action will be supported by the vocal talents of commentary team Barkery Jammeh and Jamie Albrecht along with special guest commentator former British champion and world title challenger Michael Jennings. Live Ringside Interviews will be carried out by Terry Dooley. Tune in for a great summer’s eve of pugilistic perfection!