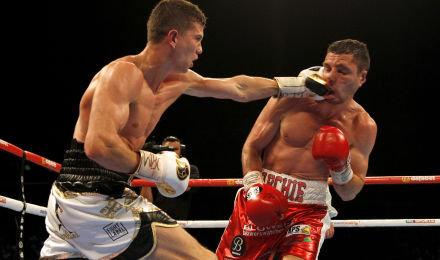 “Cool hand” Luke Campbell reigned supreme in the aptly named “Rumble on the Humber” with a 10th Round TKO over cross town rival Tommy “Boom Boom” Coyle in what was an intriguing battle.

Coyle looked to be in for a tough night from the second round, after a precise left hook to the ribs from Campbell dropped him for an eight count. Coyle recovered in stereotypical fashion, surging forward in gritty defiance.

Coyle did well to close the physical gap between the fighters from the third, leaning on Campbell and attempting to prevent Campbell utilising his reach advantage to land clean, eye-catching combinations.

The fourth and fifth rounds were a success for Campbell despite Coyle’s roughhouse approach, with Campbell unleashing combinations and a notably hard body shot at the end of the fifth, to the delight of onlookers.

Coyle looked powerless to provide a definitive answer to the examination set by his foe, though landed a clubbing body shot to Campbell’s midsection in the seventh, forcing the former Olympian to briefly take a gulp of the moist Yorkshire air.

This was the final semblance of order for Coyle, who succumbed to Campbell’s superior boxing skills in the tenth round, initially again to his greatest vulnerability, a body shot. As ever, Coyle rose to fight on, but was dropped twice more before referee Victor Loughlin mercifully jumping in to halt proceedings.