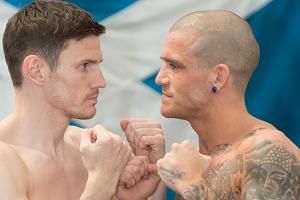 Limond Looking for Prince Win Then Return with King Khan

Commonwealth light-welterweight champion Willie Limond makes the first defence of his belt against Mitch Prince tonight (Fri 7 June) at the Bellahouston Leisure Centre in Glasgow and the champion still has hopes of one day getting a rematch with Amir ‘King’ Khan.

Limond, 34, floored former two time world champion Khan in their Commonwealth lightweight title fight in 2007, giving the Bolton man his toughest fight to date at the time. That night at the O2 Arena in London Limond (36-4, 10KOs) was the defending champion, but eventually lost his belt to Khan after retiring in the eighth round.

But the Glaswgow boxer is confident of successfully defending his crown against Mitch Prince and then he hopes that Khan will remember the chance he gave him six years ago to fight for his Commonwealth lightweight title and thinks the superstar should return the favour even though he’s looking at world titles and a fight with Floyd Mayweather.

“Khan said, ‘It was one of the best fights he’s ever had’ but it didn’t do me any favours.” said Limmond.

“I thought I was getting a rematch but nothing ever happened and I want to put it to bed.

“If I win this one I’d love a rematch with Khan. He’s shouting for Mayweather but I gave him a shot so why doesn’t he return the favour?”

But challenger Prince, 29, aka ‘Prince of Passion’ will be looking to spoil the big plans of Limond and brings his own ambitions to take Limond’s belt. The challenger has been sparring with two of Limond’s former gym mates, Barry Morrison and Michael Roberts and Prince (11-1-1, 1KO) has no doubt that has allowed him and coach Jim Love to come up with the perfect game plan to defeat the more experienced champion.

“I am well aware that it is going to take a career-best performance from me to beat Willie and I have trained in order to deliver that.” said the Scottish based, South African born Prince.

“But it has been a huge help to me that I have had Barry Morrison as one of my chief sparring partners.

“Barry is the former British light-welterweight champion and a real powerhouse and he has sparred plenty with Willie. It is just a huge bonus for me that he trains out of the Forgewood ABC. He has been a big help with inside information, you could say.

“But we have also had Michael Roberts out working with us in sparring and again you pick up things from boxers who have sparred and trained with other fighters. By the time I climb in the ring with Willie, I think I will know him better than he knows himself!

“But, seriously, I don’t think you can underestimate the importance of knowing as much as possible about your opponent.

“Between myself and my coach Jim Love we have worked out what Willie is susceptible too.

“There is no disrespect towards Willie, but every fighter has his weaknesses and we wouldn’t be doing our jobs if we didn’t try and locate them and then expose them.”