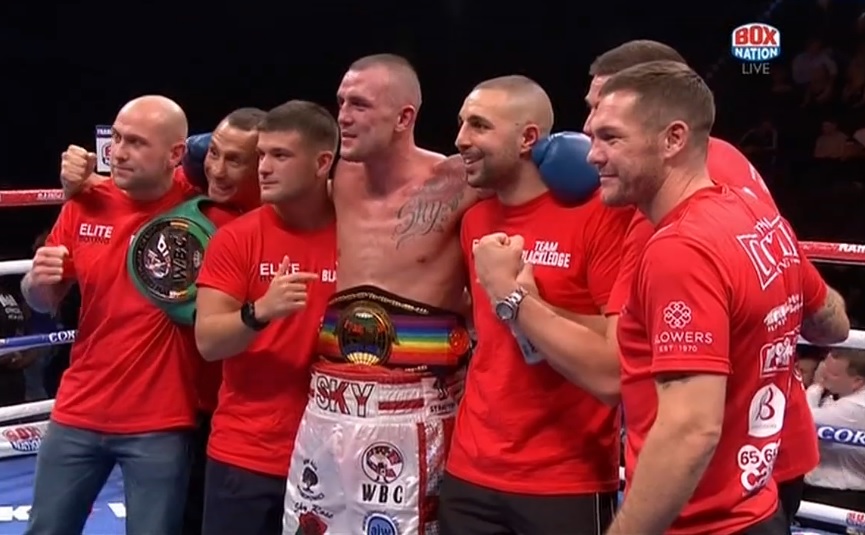 Heroics from Blackledge to retain his Commonwealth title in Manchester

The 25-year-old victor, who also holds the WBC International Silver super-middleweight strap, commented on the scoring after the fight, “I thought I won nine of the rounds and maybe lost three, or I might have lost four, tops. I thought I boxed his head off.

“I was in cruise mode, I didn’t really step it up, my hands was hurting in round three or four; he had a tough head.”

The fight panned out exactly as anticipated between the two durable, aggressive, forward-coming fighters.

The warring pair were locked together in the middle of the ring for 12 rounds exchanging countless blows to body and head with Blackledge producing the busier work to capture the judges’ attention.

Both fighters suffered damage early on, the champion with a small nick above the right eye in the opening round from a clash of heads and the challenger receiving a nasty swelling above the left eye in round two.

Blackledge started the fight brighter and livelier from the first bell, visibly hurting Markham in round two with a left hook to the midriff.

Markham was late coming out for round three due to changing gloves in between rounds.

The penultimate round saw ‘Banjo’ land the best shot of the night with a cracking right hand to the head of Blackledge which caused the champion to backpedal and cover up for the remaining 30 seconds of the round.

The final three minutes witnessed the same energy, pace, and work rate that both athletes began the fight with.

The Steve Wood-managed boxer said, “It was a hard fight but I didn’t really have to dig deep, it was a good learning fight.”

Of the changing of gloves for Essex boxer Markham, who has fought 90% of his fights in his home county and London, Blackledge grumbled, “I was a bit peed off because I was asking for Grants gloves to begin with, then the fight got stopped and he got some Grants gloves and I thought what’s going on here, where’s my Grants gloves?”

The Lancashire title-holder, now ranked in the top five in the British rankings, attained his Commonwealth strap with a career-best performance against the highly-rated Liam Cameron on the bank holiday weekend in Easter this year at Blackburn’s King George’s Hall.

Guilty of taking big title fights too soon in the past, memorably getting KO’d by Rocky Fielding (21-0) in November 2013 when accepting the fight at just three days notice, Blackledge claims to have learnt from his mistakes, “I don’t wanna’ start chasing titles because I’ve done that in the past,” he admitted. “I’ve got a title now, just wanna’ defend it again and then step up. This is only my second fight this year because of injuries.”

He continued, “I’m 25, I’m learning, been with Mat [Alex Matvienko] just over a year now, I ain’t got no rush, not gonna’ start calling all the big names out, I wanna’ sit down with my team and defend my Commonwealth again, just got a contract from Frank Warren so I’m chuffed to bits.”

Of his immediate plans for the rest of the year, he enlightened, “I’ve been in a ten week training camp so I’m gonna’ have a good night out, I deserve a night out, and then I’m gonna’ get straight back in the gym and crack on.”

He concluded, “My manager Steve Wood just came in and said he can get me a fight in December.”

It was vindication for ‘Turbo’ who won the vacant title in July against Jose Zepeda, but only by default after the American dislocated his shoulder in the second round.

The 26-year-old southpaw floored Magdaleno with a barrage of powerful hooks and crosses three times before the referee called a halt to the action in the second round at 2:30, sending a firm message to his all rivals in the 135lbs division.

He said afterwards, “That was a cracking performance, I was really pleased with that, maybe I could have done him a bit quicker, but I’m right happy with that.

“Now people will start standing up and taking notice of me and know that I’m the real thing. Anyone who knows me knows that I’ll fight anyone, anytime.

Liam Smith (21-0-1), 27-years-old, became the first of the talented Smith siblings to win a world title, just as his older brother Paul Smith Jr. predicted he would, knocking out American John Thompson (17-2) inside seven rounds.

‘Beefy’s’ punches were snapping Thompson’s head back and the Gallagher Gym fighter sensed blood in the sixth round consequently landing some huge shots before the end of the round sounded.

In the seventh, Smith knew the stoppage was on the cards and piled on the pressure, dropping the Yank with a huge trademark right and the New Jersey fighter went down heavy. He tried to rise but then slumped back down again with the referee rightfully waving it off.

The new WBO World light-middleweight champ beamed, “It’s an unbelievable feeling and it hasn’t sunk in yet, but it means the world to me.

“It’s the only belt we’re missing in the family and I’m over the moon to be the first to bring it home and hopefully it will be the first of many world titles.

“I’m now in the elite of the 154-pound division and the other Americans can start calling me out now. I’ll fight anyone, the division is packed with names Charlo, Lara, Alvarez, but I’ve arrived now and they can chase me.”

General consensus from viewers, as well as the pundits at ringside, was that Stalker, owner of a Commonwealth Games gold medal, did enough to deserve the win.

Mancunian Adrian Gonzales (12-1), who once made his debut at the MGM Grand, Las Vegas in 2008, put former English champion Jon Kays (21-5-1) down four times on his way to claiming the vacant WBO European super-featherweight title.

Highly-ranked southpaw Jack Catterall (13-0) from Chorley became the first person to defeat Jarrken Putkonen (12-1) from Finland in a defence of his WBO Inter-Continental light-welterweight strap, winning on points via UD.

Switching stance and landing heavy shots freely, the Irishman had the Hungarian on the canvas three times before the referee had seen enough.

Burnett will next fight on November 23 in London for the vacant British bantamweight title against arguably one of Britain’s best ever bantamweights in Nottingham’s Jason Booth (38-13).

Bolton’s middleweight debutant Jack Flattley (1-0) kicked of his pro career with a points win over the durable Lewis van Poetsch (4-27).

Indian superstar Vijender Singh (1-0) got his professional career off to an explosive start with a third round stoppage of Johnny Greaves-trained Sonny Whiting (2-2) from Kent.

Singh made a successful transition following a glittering amateur career, winning the bronze medal at the Beijing 2008 Olympics and now aims to become India’s first ever professional world champion.

Singh’s second fight has already been confirmed and he will head to the Harrow Sports Centre in North West London on Friday 30th November.