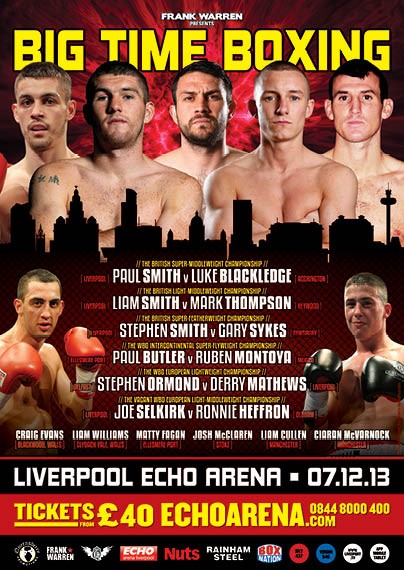 Mexican warrior Ruben Montoya says he will be Paul Butler’s worst nightmare when they clash at the Liverpool Echo Arena on Saturday 7th December, live and exclusive on BoxNation (Sky Ch. 437/Virgin Ch. 546).

Fearsome Montoya, who has stopped eight out of twelve opponents, aims to derail the hot and undefeated Ellesmere Port star when he travels to the UK for the first time and adds that Butler is out of his depth fighting a Mexican.

Butler, the current British and Commonwealth Super-Flyweight Champion, faces the riskiest fight of his career when he defends his WBO Intercontinental title against Montoya with the Vacant WBA Intercontinental belt also on the line.

“Butler has shown that he is a good fighter and can fight, I respect him as every opponent, but I will beat him,” Said Montoya.

“I will bring the heat and I will give Butler a tough night. I will be a nightmare for him. He will find out that fighting Mexicans is such a different league,”

“He has never been down, well tell him that there is always a first time and on December 7th I’ll take him into deep waters. He will know places where he hasn’t been before. He will visit the canvas, I assure you.”

“I’m very confident of myself and with a good preparation, I know I can go toe-to-toe the full 12 rounds and I don’t think Butler can match my pace,”

“I fight all three minutes of each round, good physical condition and determination are my tools.

“I can’t wait to December 7 to see if he can stand to his words that he’ll beat me.”

A further big title fight added to the card sees a potential thriller between the unbeaten Joe Selkirk and Oldham’s hard-hitting Ronnie Heffron for the Vacant WBO European Light-Middleweight title.

The undercard will feature Ellesmere Port’s fast-rising lightweight Matty Fagan; top unbeaten Welsh talents Craig Evans (super-featherweight) and Liam Williams (middleweight) will both feature and making his debut for Queensberry Promotions will be Stoke welterweight Josh McLaren who will be looking to make a big impression. Completing the card will be Manchester’s Liam Cullen (cruiserweight) and Ciaran McVarnock (featherweight).