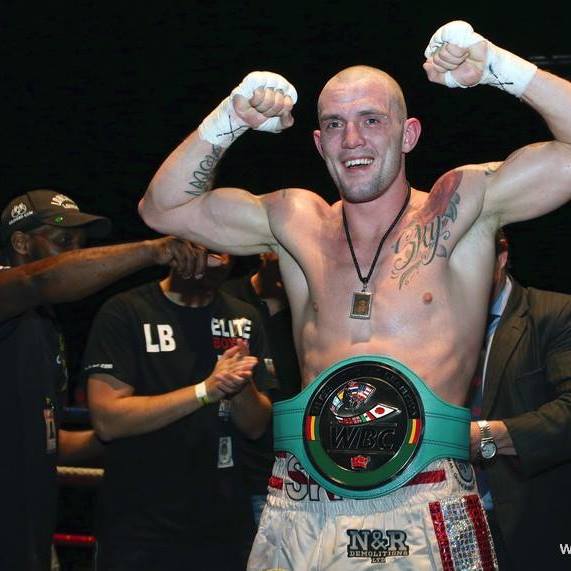 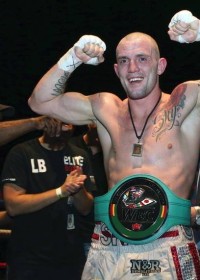 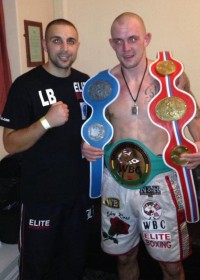 WBC International Silver super-middleweight champion, Luke Blackledge 18(6)-2(2)-2 notched up another win on his respectable record with a shut-out points victory over Bulgarian, Konstantin Alexandrov 3-4-0 in Blackburn on November 22nd.

Konstantin Alexandrov, number two ranked middleweight in Bulgaria, was only given the fight at just  a few days notice and came to the UK for the first ever time to challenge Clitheroe boxer, Blackledge. With the same number of wins as losses on his ledger, only six fights and under two years experience as a pro, it was an easy night’s work for the WBC International Silver champion, winning all eight rounds on the scorecards.

“I won every round, easy night’s work to be honest. He caught me with one good shot in the early rounds but I boxed his head off. In the fifth round my right hand got hurt, I bruised all my knuckles so I just worked my jab and left hooks instead,”

Top ten ranked Blackledge at 24-years-old has been involved in six title fights in under two years, collecting British Masters, International Masters and the latest addition – the WBC International Silver super-middleweight title and will now be seeking bigger fights in 2015, “There’ll be bigger fights in the pipeline for next year. Basically, for the next year I want to chase after the WBO or Commonwealth because I feel that I’m at that that level now, or the British title. Paul Smith is fighting Arthur Abraham again so why can’t me or Tobias Webb or Callum Smith or Frank Buglioni fight for his title – it’s just sitting there doing nothing,” said Blackledge.

You would think that the former unlicensed fighter would be enjoying a well-earned break after the fight but instead the Blackburn FC fan is back in the gym already, “I’m going back in the gym today, my hands a bit sore so I’ll have to be careful with that.”

The former Commonwealth title challenger went on to explain why, “I’ve just got a feeling that a big fight is going to come up, so I’m going to get back in the gym and keep myself fit so that I’ll be ready.”

When asked exactly what title he would like to fight for next, Blackledge replied, “I’m hoping for a big title fight next – Commonwealth or British, or even an eliminator. Tobias Webb won on the same night so that could be a future fight.”

Luke praised his fans and manager, “Thanks for all the support, and to my family. I’d also like to thank my manager, Steve Woods for everything that he has done for me.”

In other action on the night, AJ Faizy 4(4)-0-1 remained unbeaten as he stopped Mark McKray in two rounds. The 21-year-old light-welterweight has now stopped four in five opponents and moves up into the top 20 in the rankings in arguably one of the toughest divisions in boxing.

Super-middleweight Tobias Webb 15(2)-2(2)-1 earned a tough points win over seasoned veteran, Elvis Dube who consistently gives a good account of himself in all competitions. The Welsh 26-year-old, Webb could well be on a collision course with Blackledge in the near future.

Unbeaten 25-year-old, Shayne Singleton 20(6)-0-0 from Colne scored a points win over 22-year-old Yorkshire light middleweight, Adam Jones 3-6-4 as he closes in on a top ten ranked spot in the welterweight division.

Southpaw Ali Shah 7(2)-2-0 doubled his loss tally by losing on points over six rounds to unbeaten opponent, Mick Hall 11(1)-0-0. This was the second time that Shah went in against an unbeaten boxer, first time was back in 2011, losing to Prizefighter winner, Glen Foot.

Super featherweight, Isaac Lowe 9(3)-0-0 edges closer to a double figure win record and also closes in on the top ten and onto inevitable title fights that will surely be just around the corner for the talented 20-year-old from Morecombe.