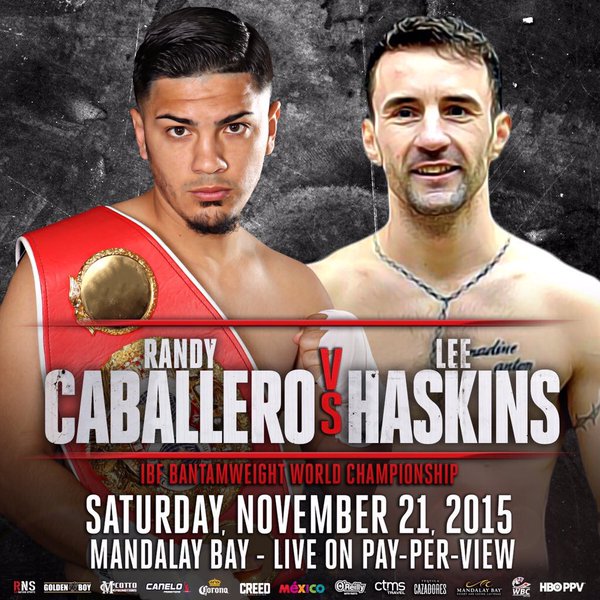 Caballero will never have seen anything like Haskins style before

IBF interim world bantamweight champion Lee Haskins faces Randy Caballero in Las Vegas on Saturday night (November 21) and knows that victory will finally give him the right to call himself world champion.

The 31-year-old Bristolian won his IBF interim title in June with a stunning sixth-round knockout of highly-rated Japanese southpaw Ryosuke Iwasa, live on Channel 5, but must now beat IBF world bantamweight champion Caballero to upgrade his belt and be recognised as a genuine world ruler.

“I have to beat Randy Caballero to become a true world champion,” said Haskins.

“I’m now one of the best in the division. That was proven against Iwasa. But I don’t believe I’m a legitimate world champion yet.

“There are a few other British ‘world champions’ in a similar position – either interim champions or regular champions – and they are happy to pretend they are the real deal. But that’s not me. I’ll beat Randy Caballero on Saturday night and then call myself world champion.”

American Caballero is unbeaten in 22 professional fights, 13 of which have ended inside the distance, but hasn’t fought since beating Stuart Hall over 12 rounds in October 2014. He won the IBF world title that night in Monte Carlo – the very title Haskins is desperate to get his hands on this weekend.

“Caballero is a good fighter and is solid all-round,” said Lee, 32-3 (14 KOs). “I’ve been keeping my eye on him, knowing that a fight between us could happen, and I’ve always fancied my chances of beating him.

“I’m unpredictable and unconventional. Even I don’t know what I’m going to do a lot of the time. And I know Caballero will have seen nothing like me before.”

Haskins’ manager, Chris Sanigar, added: “Lee’s been looking great in the gym, he’s done everything right, and we’ve got 100% confidence in him.

“People say he’s got a puncher’s chance, but he’s got much more than a puncher’s chance. He can outbox Caballero and he can knock him out. Caballero will never have seen anything like Lee’s style before and it could leave him bamboozled and wondering what’s hitting him. I have total belief in Lee’s ability to pull this off and bring the world title back to Bristol.”