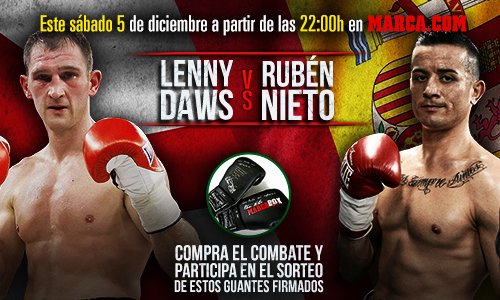 It was a frustrating night on Saturday for London’s Lenny Daws on Saturday night when he was controversially disqualified in his challenge for the vacant EBU super-lightweight title against Spain’s Ruben Nieto at the Westcroft Leisure Centre in Carshalton Surrey.

Daws, 36, a former holder of the belt and former British champion, who was fighting in his home town had been dropped in the third round from what appeared to be a low blow, but the referee deemed it a legitimate knockdown and administered a count.

A clash of heads left Nieto with a bad cut to his right eye, the ringside doctor looked at the cut and advised thereof to call  the fight off.

Referee Freddy Rafn had judged the butt to be deliberate, but there was confusion in the ring as both corners celebrated prematurely before the official announcement was made.

“We clashed heads, yes,  and he came off worse yes. The doctor has had a look and said he can’t continue and then the ref has come to me and said you’re disqualified,” Daws told Channel Five.

“It seems a very funny decision. It wasn’t intentional, he’s come in and I’ve just tucked up. Then his corner was celebrating and jumping around but we had no idea what the outcome was.

“As it went on I was starting to feel better and I was pressing him. I could see him getting very tired but it’s just one of those mad things.”

Furious promoter Mick Hennessy blasted referee Rafn for his performance and has demanded an immediate rematch. Watch the post fight video interview with Hennessy below by iFLTV.

Lets hope a rematch can be made for Daws soon.