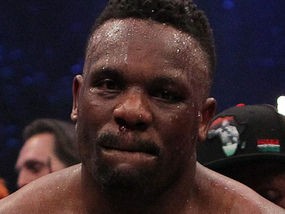 On the same bill as Deontay Wilder’s 9th round KO over Artur Szpilka on Saturday night in New York, Charles Martin claimed the vacant IBF title when Vyacheslav Glazkov was forced to retire in round three with a knee injury.

Tyson Fury, was stripped of the IBF belt when he agreed a rematch with former champion Wladimir Klitschko, after defeating the Ukranian in November to take his WBA, WBO and IBF titles, rather than fight mandatory challenger Glazkov. Even though Fury had a clause in the Klitschko contract for a rematch. Martin vs Glazkov was made and California’s Martin became the latest heavyweight title belt holder, joining Fury and Wilder.

“I want to unify all the belts. I want to fight Tyson Fury, I want to fight Deontay Wilder, everything. I want all the hardware. Tyson Fury has more belts, so we’ll take that first. As long as the fans want it, I’m with it.” said Martin at the post fight press conference.

The new champ was later interrupted by a rather unexpected guest in the audience, It was non other than our ‘Del Boy’ the former British heavyweight champion and world title challenger Dereck Chisora!

The Londoner got into the presser to stake his claim for a shot at Martin’s new IBF belt and started by congratulating the new champion and his team, before calling him out to fight. “I take my hat off to you,.” said Chisora to Martin.

“When are you going to fight to defend the title? Me and you can do it, I’m down for fighting, I’ll challenge you any time you want, we’ll speak to your team, and if me and you can do it, I don’t mind doing it.” added Chisora, who wasted no time in calling out the newly crowned champ.

“I’ll challenge you any time you want, man. Should we do it in Vegas? LA? We’re all here, all the heavyweights are here, we’re like a bunch of hyenas, we come to get the scraps, that’s it. Well done, guys, anyway.”

Chisora insisted that he thinks Fury would be too much for Martin and that’s why he should take him on first, saying; “I don’t think you can beat Tyson Fury, the guy is just too big.”

WATCH CHISORA CALL OUT MARTIN AT THE POST FIGHT PRESSER