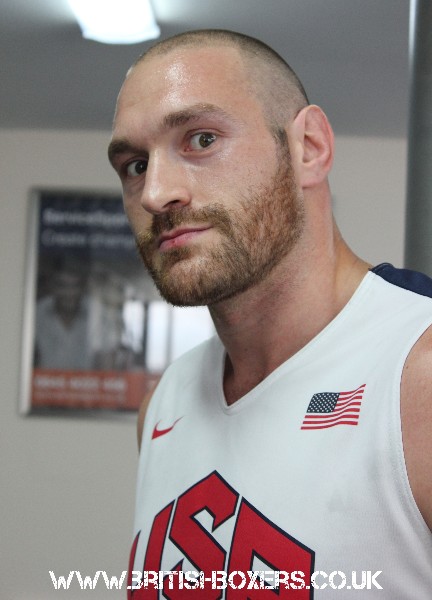 ITS ON! October 24th – Fury tells Klitschko “I’m coming to rock your country.”

Unbeaten Tyson Fury (24-0, 18KO’s) will fight Wladimir Klitschko (64-3, 53KO’s) for the world heavyweight title on October 24th in Dusseldorf, after terms were eventually agreed between both camps

The fight was expected to go to purse bids on Monday evening but with just 4 minutes to spare, before the fight went out to bid an agreement was reached between both the parties to stage the fight in Germany.

Fury tweeted to Klitschko on Monday: ‘It don’t matter where this fight is, Ukraine, Deutschland, Japan, it will be the same outcome u getting KTFO, #&THE NEW.

Mancunian Fury is expected to recieve a purse in the region of £1million for the fight against the Ukrainian, champion who holds the WBA, IBF and WBO world title belts.

The Fury team had pushed to try and get the fight on UK home soil, but negotiations to bring the fight to a English football stadium were dismissed, with the champion prefering to fight in his adopted home country.

Fury, 26, will enter this the biggest fight of his career as a huge underdog to the 39 year old Klitschko. Added to that he will be the away fighter and will in most eyes be up against shifting the 67 fight veteran, who has gotten better with age.

The last Brit Klitschko took on was David Haye, defeating the Londoner on points in 2011. He will again, in Fury, be confronted by someone not backwards in coming forward when it comes to pre hyping a fight and trying to get under his opponents skin. Fury though believes his size and youth and desire will be enough to see him create a new era in heavyweight boxing.

Fury wrote on his Twitter: ‘VivaDeutschland, I’m coming to rock your country in October be there of miss the best fight in heavyweight history, #letsgetthispartystarted.’

more to come on this fight…

VIDEO WATCH! Fury talks about sparring Klitschko and says ‘If he ever gets hold of the champion, he will smash him to bits!