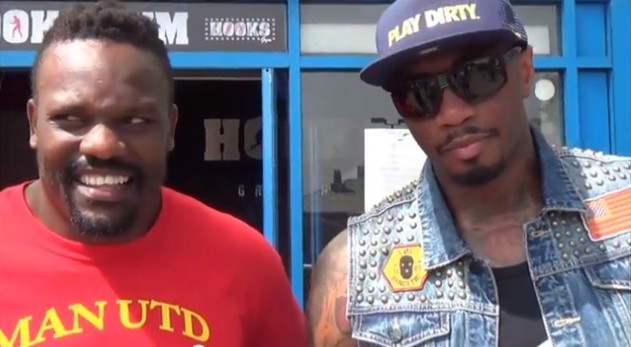 Chisora, 29, was involved in three of the biggest fights of 2012, against Vitali Klitschko for the world title in February, David Haye an hour later in a street fight brawl at the post fight presser in Germany, which sadly made more headlines around the world than the proceeding world title contest. After a great effort against the world champion, the Londoner lost on points.

Chisora (16-4, 10KOs) went on to face Haye again, this time inside the ropes last summer, in a fight that ended there feud, but finished with Chisora being stopped in the 5th round.

Del Boy then returned to action in April after nine months out to stop Argentina’s Hector Alfredo Avila in the 9th. Now he faces another difficult fight as the confident Philadelphian prospect Scott, 32, puts his unbeaten record on the line in Chisora back yard.

The two heavyweight contenders came face to face for the first time at his North London ‘Hooks Gym’ after the American failed to show at the press conference on Monday claiming he was not told about it by his promoters.

Former British Champion Chisora knows he will have to be at his best to get a victory over Scott. “It should be a great fight.” said Chisora.

“As I’ve said already, this guy is the phantom of boxing, he’s a nice boxer, so how do you compete with a phantom? You get in there and use speed.

“I cant wait, the fans are going to love it.” added Chisora.

Scott, 32, last fought in February, which ended in a 10 round draw agaiunst Vyacheslav Glazkovis. Malik is a confident character who has come to the UK beleiving he will ‘take-out’ Chisora, but he does admits the fight is a 50-50 call, but says he will remain unbeaten. “We are doing this for boxing, if you look this is the best heavyweight fight out there that could be made.” said Malik.

“If you look at any of the pickers, the odds, everybody got it fifty-fifty, it’s a great fight and I’m looking forward to staying undefeated.” added the American.

Both boxers agreed that the winner should be next in line for a world heavyweight title shot.