Why the Rigondeaux-Dickens fight has been called off 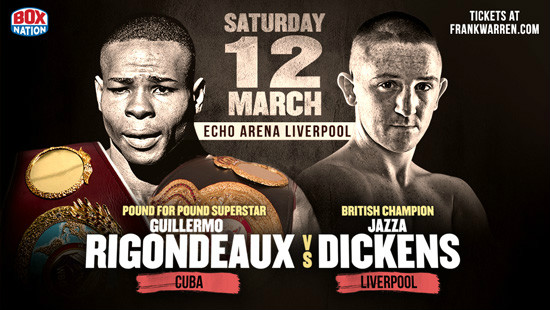 We are absolutely gutted for Jazza Dickens! He was lined up for the biggest fight of his life on Saturday against one of the worlds best boxers in Guillermo Rigondeaux but it seems like there has been a cockup somewhere along the line regarding the Cubans Visa to enter the UK.

Jazza was in great shape and mentally ready for the fight in front of his adoring Liverpool crowd at the Echo Arena. It is not confirmed if the scouser will fight another opponent on the bill

Here is the official statement from Frank Warren Promotions just in to us, confirming the situation.

Following various and conflicting reports as to the situation regarding Guillermo Rigondeaux, Queensberry Promotions (“QP”) would like to state the facts as to why, Rigondeaux will not be arriving in the UK to take part in his contracted fight against British Champion, Jazza Dickens at the Echo Arena, Liverpool as chief support to the WBO World title fight between Terry Flanagan and Derry Mathews this Saturday (12th March).

QP have been working closely throughout with Dino Duva and his team at Roc Nation Sports (“RNS”) who are all experienced boxing people and who promote Rigondeaux alongside Caribe Promotions. RNS were made aware very early in the negotiation process that Rigondeaux, being a Cuban national, would need an entry Visa in order to travel to the UK, but would not need a work permit, due to his international sporting status and this being a singular international event. Accordingly, QP issued the necessary supporting documentation for his application and accordingly, the Visa was correctly applied for by Team Rigondeaux.

QP was informed on 29th February that Rigondeaux had travelled to Russia to set up a training camp alongside his trainer Pedro Diaz, who was there preparing Ruslan Chagaev for his WBA World Heavyweight title fight against Lucas Browne last weekend. Therefore, his Visa was applied for at the UK Visa Application Centre in Moscow and following the application, his appointment took place on the 29th February, after which we were advised that “all papers were filed and being processed.”

We were told that it could take five clear working days for the Visa to be issued so Rigondeaux could travel, but the problem was, or so we were told, that due to a public holiday in Russia on the 8th March, the Application Centre would be closed and he may not be able to collect his Visa until Wednesday (9th March).

Throughout this process, QP and RNS continuously contacted the Application Centre and also our own contacts in Russia in an attempt to expedite this process and were informed that if the visa was not issued sooner, then it would be issued at the latest on Wednesday and Rigondeaux would then arrive in the UK shortly thereafter.

Yesterday (Tuesday) and for some unexplained reason, unbeknown to both QP and RNS, Rigondeaux boarded a flight to Miami and arrived in the USA on Tuesday afternoon. We have yet to establish how and why he flew to the USA and further, how he managed to fly anywhere when the normal practice is, when applying for a Visa, that you hand your passport in and get it back when the Visa is issued.

Strangely, Rigondeaux left Moscow at a time when both the Application Centre and Consulate were still closed. He has yet to explain to RNS, who are as much in the dark as QP, as to how and why he has arrived in the USA and why he was in possession of his passport which should, as is standard protocol, have been presented to the Visa Application Centre.

We are all extremely disappointed by the whole situation as Rigondeaux will not appear this Saturday and Dickens will not get the chance, that he has trained so hard for, to fight the world’s best Super-Bantamweight in front of his own fans.

We sympathise with the fans that were looking forward to watching the live in Liverpool and those tuning into BoxNation.

To clarify, QP has done everything in its capacity, at great expense, to deliver this fight on Saturday, and it is unbeknown to us as to why Rigondeaux’s visa process has been so problematic. Rigondeaux’s representatives were provided with the standard invitation letter and relevant documents to process their application by QP.