Eubank Jr Vs Tommy Langford lands in Cardiff on 22/10 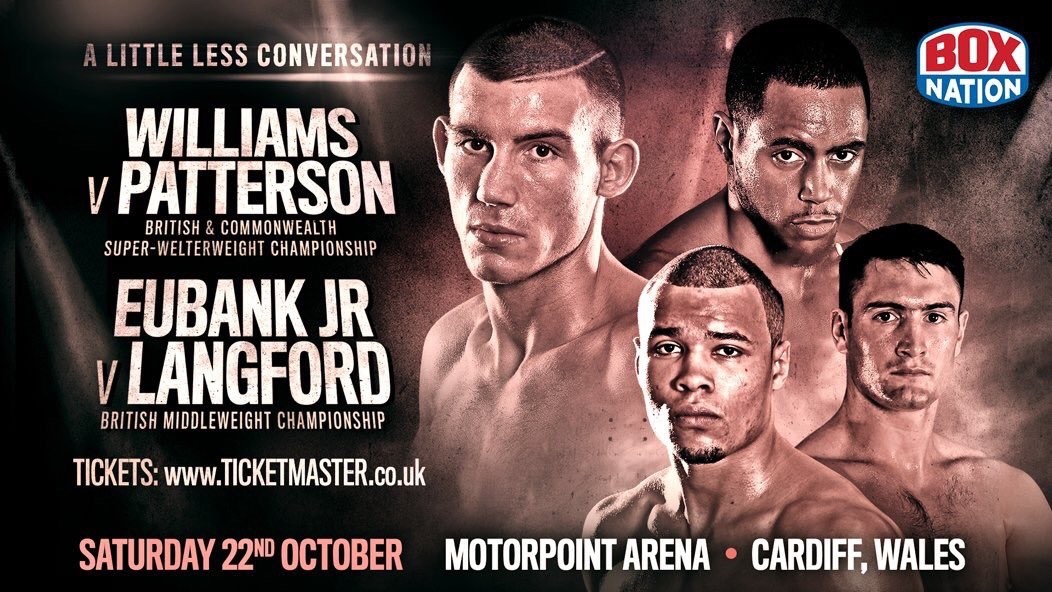 The purse bid for the Eubank and Langford’s British Middleweight title bout was won by Frank Warren earlier this month and will mark a huge opportunity for ‘The Baggies Bomber’ Langford who has sparred Eubank Jr in the past.

The WBO #2 ranked Langford said: “We’ve sparred in the recent past and, though you can’t take too much into that, I know what he does well and what he doesn’t do well and believe my style exploits his. Sure, Chris Jr is dangerous but Billy Joe Saunders exposed his limitations with his quality and movement. I know I’ve got the tools to beat him.

“I’m delighted that he’s stepped up to face me after fears he could vacate.”

British Super-Welterweight Champion and local hero Liam Williams will be looking to continue his scintillating form after dispatching another unbeaten domestic rival in Gary Corcoran with a late KO in July.

The Welshman sold close to 2000 tickets personally for that event and is building a sizeable following in his homeland.

Patterson, the reigning IBF Intercontinental Champion is set to provide the toughest test of Williams’s career to date, and both men will see this for an opportunity to put themselves in line for a World Title Challenge next year.

Whilst Tom Stalker and Craig Evans will get it on again for a third time after two hugely entertaining drawn contests in Liverpool , as Stalker puts his WBO European Title up for grabs.

Tickets are available now at Ticketmaster.co.uk and Eventim.co.uk from £40.