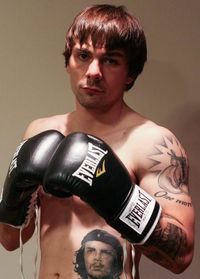 The BBC has confirmed that Dundee’s Mike Towell is in hospital in a “critical condition” following last night’s loss to Dale Evans on a St Andrews Sporting Club bill at Glasgow’s Radisson Blu Hotel.

The 25-year-old was stopped in the fifth round of the contest then was taken to the Queen Elizabeth University Hospital after receiving treatment on site.

The St Andrews Sporting Club released a statement confirming the news earlier today: ‘Mike Towell is in a critical condition in Glasgow’s Queen Elizabeth hospital after his fifth-round defeat in the British welterweight title eliminator with Dale Evans at the club last night.

‘Club director Iain Wilson and Mike’s manager, Tommy Gilmour, travelled with him in the ambulance after the fight and have been at his bedside through the night with his family.

‘We took the immediate decision to suspend last night’s show in the wake of Mike’s contest.’

Everyone at Britishboxers wishes Towell a speedy recovery.