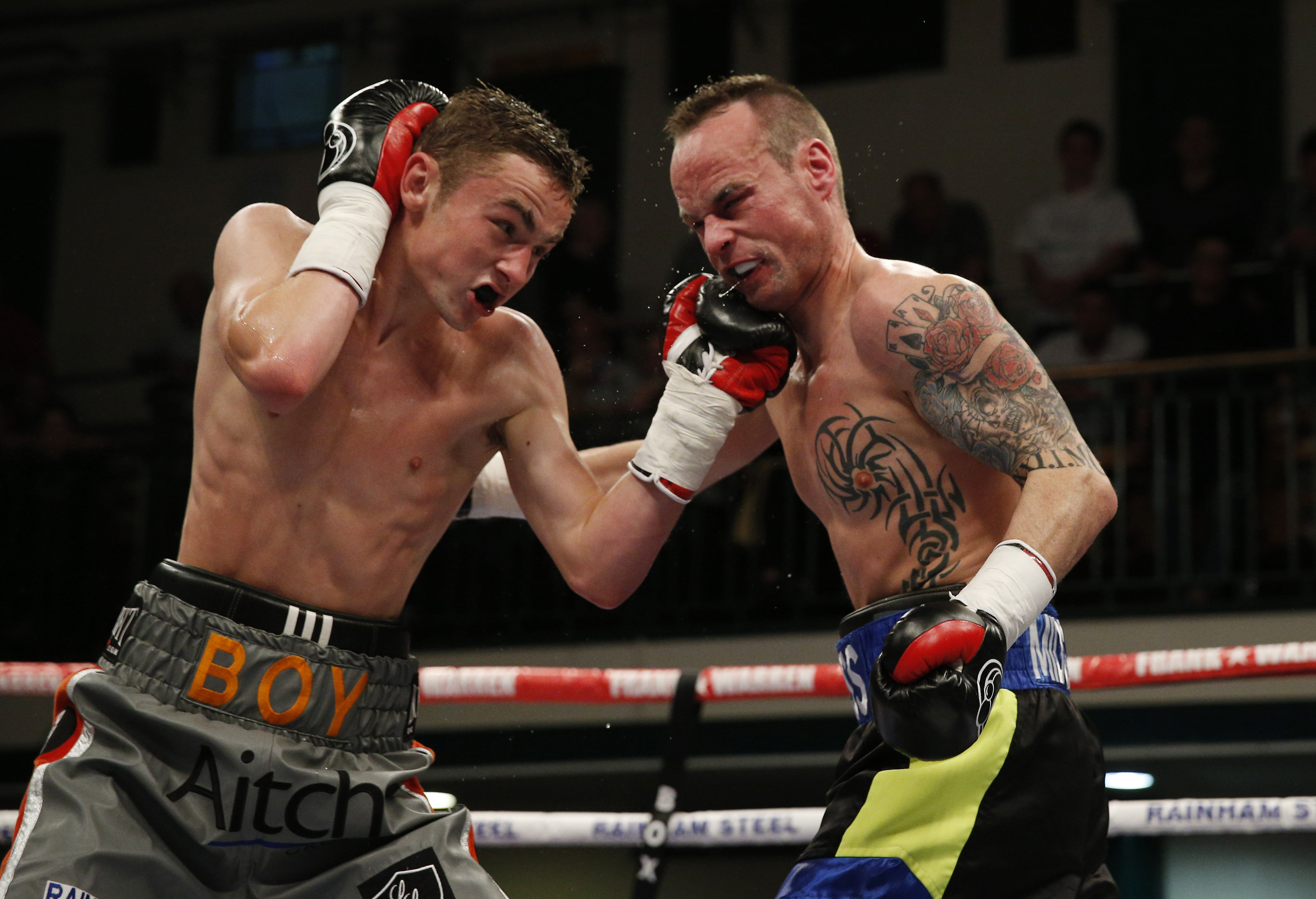 With title fights suddenly on the horizon, tittering teenage talent Boy Jones Jr is starting to get serious about the fight game, writes Glynn Evans.

The 19 year old super-featherweight with the cherubic face and infectious giggle is now undefeated in 10 (one draw) since debuting in February 2015. This weekend, the six foot stylist enters his first eight rounder knowing that an impressive win will rubber stamp a showdown with Orpington’s Martin Hillman for the vacant Southern Area belt in his home county of Essex in late November.

On Saturday, expect Chingford to descend en masse to the Harrow Leisure Centre to witness their favourite fighting son swaps blows with Hungary’s useful (11-9-1) Tamas Laska and, for once, BJJ is not smiling.

‘It’s fight week and I’m starting to get focussed. This is how I pay my bills now,’explains the angel faced assassin who has stopped six of his nine victims inside four rounds.

‘I hate to mention what happened in Scotland last week but it reminds us all that you can’t mess about with this. You can’t ‘play’ boxing. It’s about two men having a fight. I may look like a choir boy but once I put my wraps and gloves on I turn just as horrible as any of the others, believe me. I want to be the best I can be.’

Twenty year old Laska represents only the second foe with a winning card that Jones Jr has confronted during his 20 month innings as a prizefighter and, with five early wins of his own, the man from Budapest is certainly a live threat.

‘I never underestimate any opponent. Dom (Negus, the former Southern Area cruiserweight champ who trains him in tandem with Lenny Butcher) would never allow it and my mum would slap me!’  quips Jones (real name Ben) who is managed by Andy Ayling.

‘Laska went the full six with Hillman (losing 59-57 in June) so it’d be nice to make a statement and show I’m different class.

‘I’ve been sparring 10 rounds in the gym since I stepped up to six round level so I know I’m ready for eight but I am a bit nervous because it’s new.

‘I’m good to go the eight rounds but if the knockout comes, it’s a bonus. After facing me, all my opponents tell me I hit hard. And the longer I’m at the gym, the more power I’m developing. I may only be 19 but, seriously, I feel stronger as the rounds go on.

‘But boxing’s not all about strength and power. You need to be able to dodge ‘em too. It’s more important for me to show off the skills I’ve developed, especially as I never had any amateur fights. I want to show everybody my talent. As long as I win and get the ‘Thumbs up’ from Dom and Mum I’ll be happy.

It’s been a stratospheric rise through the ranks for the teenage terror who entered the profession bereft of an amateur education and with just a fistful of flare-ups on the unlicensed circuit. He’s hit double figures at an impressive ratio of one fight every two months since starting out at London’s O2 Arena early last year.

He says: ‘It’s gone really quickly. Staying so busy keeps me away from mischief and has really sped up my learning. I have to give a ‘shout out’  to Andy Ayling and Frank Warren for sticking me on so much.

‘Starting out with no amateur fights, I didn’t even think I’d get this far.  But I know I’m still on my apprenticeship, still a long way off British and Commonwealth title level and I’m certainly not going to start calling anybody out.

‘I never look more than 100 metres ahead. I’ve got to get Saturday out of the way before I even start thinking Area titles.’

Structured camps at Romford’s Five Star facility and ‘La Palestra’ gym in Murcia have accelerated his development and brought encounters with world champions.

‘Whilst training over in Spain, I saw (ex IBF super-bantam boss) ‘Kiko’ Martinez sitting in the gym. Next thing I knew, we were both putting our head guards on, the bell rang and I was facing him. I learnt I could take a shot. Cor, could he punch! He complimented me after,’ says Jones.

‘I do most of my sparring in England with (recent WBO ‘interim’ title challenger) George Jupp at our gym and Danny (DP) Carr at the iBox in Bromley; two very different styles. George is so fast and has that experience at world level while Dan is a big, big puncher. I recently sparred a few rounds with (Southampton’s unbeaten) Ryan Garner, a good boy who done far more as an amateur than me. I learn bundles from them all.’

Those experiences have enabled the tenacious tearaway to morph into a far more rounded professional of late.

‘Now I’m using my brain far more and my composure is far better,’ he acknowledges.

‘I’ve developed a wicked jab and can go back foot. I can change things up. Lately, I’m starting to
‘open the gate’ and pick holes better, to get my shots in.’

Boy wonder’s charge to the titles allows him little ‘down time’ but it is a sacrifice that he is willing to undertake if it concludes in the Area belt being clasped around his waif like waist following his encounter with Hillman in seven weeks time.

‘Away from boxing, I play a bit of snooker and TopGolf. After Brentwood, I might go to Austria for a Christmas market, treat my mum!’  he finishes.

‘I don’t watch too much of opponents on tapes because you can see things that start to worry you. But I don’t get intimidated either. I’m the fifth youngest of six brothers, remember!

‘Martin is a fit, game lad who’s got a nice engine on him but so have I. I’m gonna win that title and kick on to even bigger things.’

Go to here to see how you can watch this fight and more live!