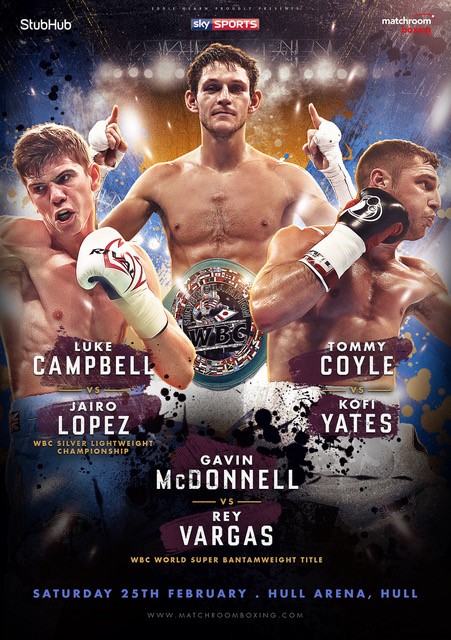 Dave Coldwell was already expecting a hectic 2017 and his schedule has become more congested with Gavin McDonnell facing Rey Vargas for the vacant WBC super bantamweight title on February 25th in Hull. McDonnell will enter the ring an underdog against one of boxing’s rising talents but as proven many times before, Coldwell excels in that role and will be aiming to cause another upset on the world stage.

“It’s the way I like it,” joked Coldwell. “Gavin has been improving at a frantic rate since joining me and this is the ultimate test for him and its a test where he can’t cut any corners whatsoever. He’s gone down quite a traditional route towards this title and there’s no doubt it’s his hardest fight to date but it’s a fight he can win and to do that he’s going to have to be switched on from the start and really make it uncomfortable for Vargas. Matchroom have done everything in their power to get this fight over here and little things like that can make the difference.”

On Vargas, Coldwell added, “He’s a class act and someone who definitely has a bright future but he’s under pressure too and he’s got a lot to contend with fighting a young hungry fighter who’ll have the crowd on his side. We’re the underdogs and there’ll be negativity in the build up but I’ve had that when Jamie McDonnell beat Tomoki Kameda and Makabu was supposed to end Bellew early too. People can write Gavin off but they might be in for a surprise next month.”