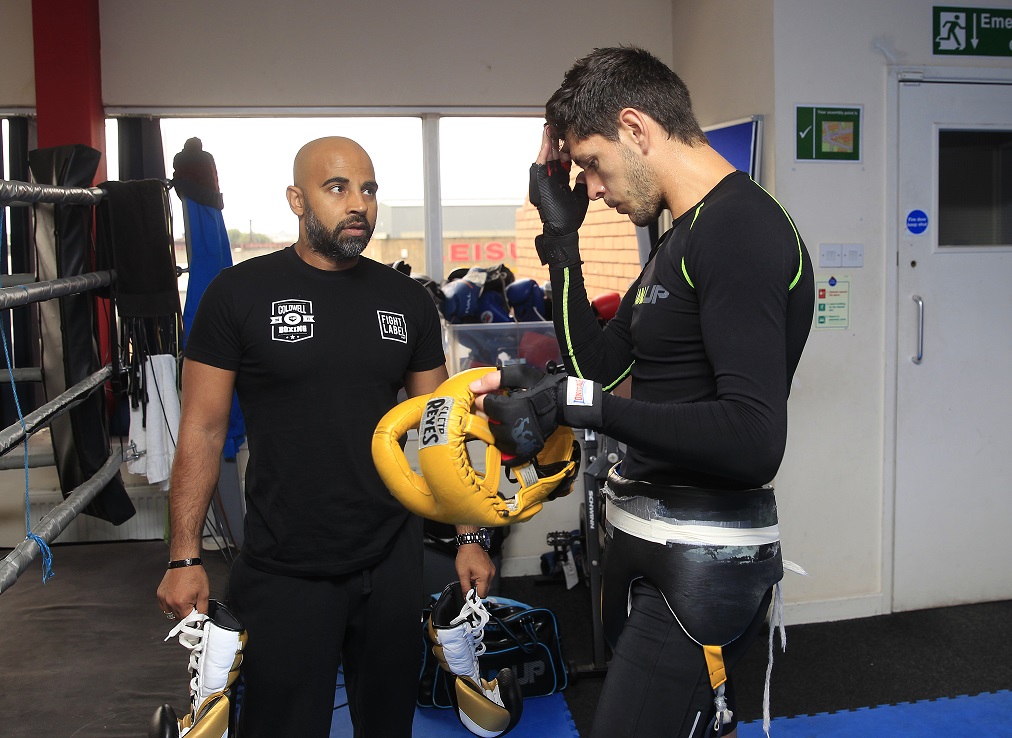 Whilst most people were enjoying their Bank Holiday Monday at home, it was just another day in the office for Dave Coldwell. He spent the time putting Jamie McDonnell, Gavin McDonnell, David Price and then Tony Bellew through their paces and even made time to speak to Britishboxers.co.uk that evening.

For those that are unaware, Coldwell has partaken in just about every role in boxing : fighter, trainer, promoter and manager. It is career that has already spanned over 20 years, and has far more to come.

As a fighter, Dave admits that he suffered from a lack of confidence; he says that this held him back during his career, although he did go on to win the Central Area Flyweight Title with a points victory against Louis Veitch in October 1998—this achievement shouldn’t be overlooked. During this time, he was also assisting with the training of youngsters and amateurs, gaining invaluable experience that would later be useful in the gleaming training career that has followed.

Coldwell was the Head of Boxing for Hayemaker Promotions between 2008 and 2011 and had a key role in developing fighters such as David Haye, George Groves, Kell Brook and Ryan Rhodes.

After a break from training to spend time with family, he received a call from close friend Tony Bellew—the rest is history. Little did he know at this point that three years later he would be involved in one of British Boxing’s finest nights in recent history, Tony Bellew stopping Ilunga ‘Junior’ Makabu via a spectacular third-round knockout at his beloved Goodison Park.

Next up for Tony is a grudge match against American veteran BJ Flores to mark the first defence of his WBC Cruiserweight World Championship. When asked whether it was hard to maintain the same intensity in training for this fight, now that Tony had realised his dreams of becoming a World Champion, Coldwell replied: “Tony is a very hungry fighter, when he won the world title he achieved his dream, but the job’s not done yet—there’s a lot of big fights out there.”

He added: “There’s some needle there between him and Flores; the determination and the drive, that’s still there.”

This isn’t difficult to believe, as he reassured me that when fighters step through those gym doors ready for training he is the man in charge, laying down the rules.

“I’m the boss,” he insisted. “I take no shit. If I’m putting my time into it then I want to win, I want my fighters to win. We have a laugh, but things get done, things have to get done. If things aren’t going as I want, then there’s a bollocking to be given out.”

Despite it being a small team, each boxer still needs to be dealt with differently, both physically and mentally. In recent times, few in the team would have needed more support mentally than David Price, who is looking to rebuild his career again after losing to Tony Thompson, twice, and Erkan Teper—both of whom have since failed drugs tests after the respective bouts.

When asked about how he dealt with this in training, he said: “I’m a very positive person when it comes to my fighters, I don’t allow any negativity in the gym. I spend a lot of time talking to my fighters, particularly Pricey. It’s not about talking bullshit, there’s a reason and an explanation behind everything.

“With Pricey, his mentality now is completely different. Whether they’re on gear or not, if you get hit on the chin by someone that size, then you’re going to be wobbled. Pricey lost to Teper because he didn’t impose himself. Had he gone out with a strong mentality like he has now would Teper have landed those shots on him? I don’t think so.”

Now that Price has his confidence back, I questioned Dave on what he thought about a potential matchup with Anthony Joshua following the recent Tweet calling him out. “To say that Pricey has no chance against Joshua is ludicrous,” stated Coldwell.

“The man is a genuine puncher, and when you hit that hard you’ve got a chance against anybody. People are forgetting that Joshua has been hurt before.”

I also asked for his thoughts on another potential match up, Bellew against Haye. The ‘Bomber’ called out Haye in his entertaining post-fight interview following the Makabu KO. Many may have thought this was just a case of an adrenalin rush with the Goodison faithful screaming his name, but it now seems there is real likelihood of this fight going ahead in the future.

When asked as to whether he thought his time spent in and around the Hayemaker Gym through the years could provide an advantage for a future dust up, Coldwell said: “I expect him to be different as a man, and different as a fighter. Let’s be honest, I’d hope he is different, as back then he was absolutely phenomenal.

“But he’s had four years out and not shown anything in his fights since to show that he’s the same fighter. We’ll cross that bridge when we come to it. To me, in the two fights so far, he doesn’t look anything like he was before.”

One matchup that does seem unlikely is Jamie McDonnell versus Scott Quigg. It is now believed that Quigg is going to step up to featherweight and pursue a rematch with Carl Frampton. “You’ll see the best of him at Super bantamweight, I guarantee it,” said Coldwell when asked about McDonnell.

“Unfortunately, it looks like Quigg is moving up to featherweight in the hope of a Frampton rematch, which is a real shame, as that would have been the great breakout fight that he could do with.

“He’s a lot better fighter now than what he was then (in the Kameda fights). I’m really excited about Jamie McDonnell, he’s the most underrated fighter that we’ve got in this country.”

It’s been an extremely positive year for Gavin McDonnell. Many believed that Gavin was no more than a domestic level fighter when he first stepped onto the scene, but this year has proved that he is certainly far more than that. Gavin won the European title in his last fight (as Chief Support on the Frampton—Quigg PPV card) and has been steadily rising up the world rankings as he continues to make his mark.

“He’s working, he listens to what I say and he’s improving,” Coldwell told me. “I’m so proud of what he’s done and what he’s achieved. He’s a quality operator now, he really is.”

It’s easy to forget that as well as the work that’s put into training in the Gym, Coldwell also manages a stable of fighters. This was brought to the forefront in June of this year when Tom Doran sat alongside his manager at the top table for the undercard press conference for Joshua’s maiden IBF heavyweight title defence against America’s Dominic Breazeale.

“Dazzlin’” Doran was set to face Chris Eubank Jnr, during the press conference “English” attempted to belittle Coldwell and began to question his professional record and achievements as a fighter. They exchanged words back and forth; this was a surprising, but understandable, change of tone for the Sheffield man.

“How great of a footballer was Fergie and look what he went on to achieve in his coaching career, it’s the same in most sports,” argued Coldwell. “He would not last two minutes with what we do. After the fight, I went into their changing rooms to say well done. Senior shook my hand, but he was so smug.”

It’s fair to say that there is no love lost between the pair.

Coldwell has previously stated that he’ll never retire from boxing, as it’s the only thing he wants to do. Indeed, his big ambition in life is to be able to look back on his achievements and say he’s happy with what he did. Even if he retired now, he’d have plenty to smile about and plenty more tales to tell. However, with the way the future is shaping up, you can’t help but feel there are plenty more great nights ahead that he’ll be able to talk about for many years to come.