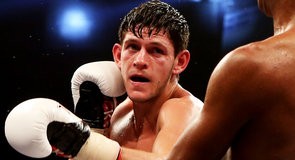 With boxing in America currently riding a high wave due to the astronomical success of the recent Floyd Mayweather/Manny Pacquiao fight, Doncaster’s Jamie McDonnell is aiming to capitalise on the sport’s popularity stateside when he takes on quality Japanese fighter, Tomoki Kameda, this weekend in Texas. McDonnell has spent the last two weeks in the Lone Star State alongside brother Gavin, and manager, Dave Coldwell, with the latter occupying corner duties due to Dave Hulley’s fear of flying. Coldwell is confident that his man can pull off a memorable upset.

“Obviously things didn’t get off to the best of starts with the flying issue but that has firmly been left behind and we’ve handled it in a professional manner ever since. You only have to look back at Jamie’s career to see how he handles setbacks and this Saturday will be no different. We’re well aware that we are in there with a quality fighter protecting an undefeated record but Jamie’s in fantastic form and he’s shown he’s a world class fighter himself on several occasions. Bookies have Kameda a decent favourite but we firmly believe that they’ve got it wrong this time.”

McDonnell’s path to this huge bantamweight battle has been far from straightforward with plenty of outside politics halting his progress at important stages of his career. With the show set to receive an afternoon television slot on CBS in America which in turn guarantees a primetime Saturday night on Sky Sports in the UK, McDonnell will have plenty of viewers gazing on him as he looks to leave a mark on the viewing audience. With Kameda possessing a prestige reputation within the boxing community, a victory for the energetic Yorkshire man is likely to boost his popularity and lead to future lucrative matches.

“This is the big league that Jamie is in now and there’s no turning back from here. This is where he wants to be and this is where I want him to be. He’s at the top table now. A big show in America against a brilliant name and the rewards for victory are set to be huge. The hard work has been done and Jamie is in a fantastic place ahead of what is a brilliant matchup between two quality fighters who are likely to meet head on. The fans are definitely going to be entertained in this one and I’m so sure that Jamie McDonnell’s name is one that they’ll be talking about afterwards.”