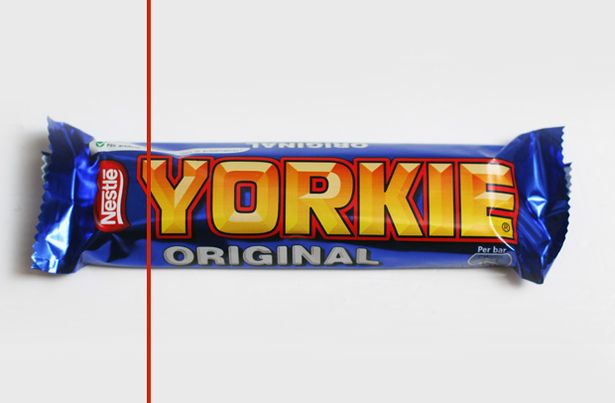 I am a child of the 1980s, some of you may have been born either before or after that decade, but one thing we all have in common is being handed a bit of money (16p for a Mars Bar in 1980, more on that later) to nip out to the shop for a bar of chocolate—a Mars bar or a Yorkie, ideally—and rushing home with the comforting weight of that piece of confectionery in either our hand (careful, they melt) or pocket (wrappers on, please, in order to avoid linting that bad boy up).

However, in the mid-to-late 1990’s and noughties the confectionery makers started surreptitiously reducing the size of their products: Yorkies lost a piece, from six to five, and shrunk by 20%, Wagon Wheels were hit with a 12% loss of mass, from 79mm to 74mm, and you are lucky to get more than a handful of crisps in a packet.

In reality, the not so incredible shrinking confectioneries were not a concerted attempt to make us healthier and were simply endemic of the modern world, a world awash with consumers who are desperate to buy and to be seen to buying. Manufacturers of any type recognise this desperation so they can get away with pretty much anything. It has now reached the point were we will bear witness to the rise of the £1 Mars Bar, possibly within the next year or two. A Mars Bar would set you back 0.06p in 1974; by 2014 they had risen to 0.79p, an increase of 1317%.

Still, we will continue to consume them despite the inherent unfairness of what the powers-that-be have done to our confectionery. In that twilight, maddening time between lunch and leaving work many of us experience an ache, a need to fill a gap, and we head to the nearest shop or vending machine to purchase our overprice, undersized bars of chocolate.

You may get a deal in the shop, you may pay 0.80p for a double Mars bar, which in reality is only a gram smaller than the old King size ones—the ones they outlawed for being too big—but the vending machines won’t give you anything. In fact, they are there to steal your soul and will do this by charging you between 0.60-70p for a Mars Bar—I have also seen with my two eyes a Galaxy that was priced at 0.75p.

Despite all this we will continue to consume them. In the song (well, it is not so much a song as an eerie opening to their debut album) Wolves by Dead Prez, a narrator, Omali Yeshitela of the InterNational Peoples Democratic Uhuru Movement, talks about an Arctic hunting technique in which a sword is placed into the ice and some blood is left on the blade. A wolf approaches it, thinks it is eating a meal after licking the blood, slices its own tongue to pieces and bleeds to death—all the while thinking it is eating a nice meal.

The story is told as a metaphor for America’s crack epidemic in the 1980/90s, but boxing is far more important than crack, and more addictive—although I hear that that particular drug is quite moreish—so the track could be flipped to reference the average boxing fan, so-called hardcore and casual alike. We all need a fix, just like we need our Mars or a bit of crack to help us through our long working days.

You get a taste for something, in some cases the sport itself or in others you may see someone like Anthony Joshua achieve some sporting success, think, ‘Wow, a British sportsman doing well—I will watch his fights’, and do something as highly heinous as paying to watch his fights on PPV. This creates an upsurge in figures, with the knock on effect of fans latching on to other PPV “grudge” events, and PPV once again proves itself a “economically viable.”

This is not a polemic on right or wrong—nor a solution, because there isn’t one. It is, returning to Yorkies, a theme of the world in which we live in, one in which we need to ensure we have sufficient content on our huge TV screens to justify the money we shell out on at least two of them per household.

With the rising alcohol prices in pubs and the subsequent drop in the number of real pubs, not bars, it is no surprise that more people seem to be willing to pay for more PPVs than ever before. Or, given the price we pay for concert tickets and whatnot, events featuring one-sided blowouts, i.e. every Joshua fight bar his British title fight with Dillian Whyte, will do big numbers for the main event while featuring a number of empty seats during the undercards—and his meeting with Wlad Klitschko looks unlikely to buck the trend as the card looks exceptionally poor with only a month to go.

Therefore we have seen undercards go the way of Yorkies, they can fill a gap between lunch and dinner, but they are not the beasts that they once were, both in the U.S. and the U.K. Roll back to 1996, the first time that Sky Sports hit us with a PPV in the U.K. and you had a telecast that featured the previous night’s Night Of The Young Heavies bill, followed by a genuinely interesting heavyweight title fight, and all for £9.95.

There can never be a true golden age when you are paying topspin on what should be a basic service, but that bill led to a run of mammoth shows that started in the U.K. quite early in the evening before switching to a live U.S. feed. Indeed, when Tyson met Evander Holyfield in 1996 one broadsheet writer complained that there had been too much boxing the previous night, that it was overkill to switch from Frank Warren’s The Eyes Of The Tigers show to the U.S. show.

Yet for many British fans this era was akin to the “Golden” Ali-Frazier-Foreman-Norton era when it comes to measuring PPVs. A time when you would kick off with a Paul “Scrap Iron” Ryan fight down the pub, which is probably now either derelict or gentrified housing, before making it back in time for pizza and the crossover to the U.S. Nights when grown men would forget etiquette and by 5-6am would be sat with their belts undone, bellys protruding and the black lights of tiredness playing across the corner of their eyes.

Those days, like the days of Mars Bars that could stop a bullet and proper Yorkies, are behind us, let alone a return to the likes of the Don King-promoted epics such as the streamlined, by his standards, The Crown Affair. Markets change, buying remains and, like the chocolate bar providers who claim that the change is down to the increased demand for cocoa coupled with diminishing supplies, boxing promoters will happily whip out the violins to make a sad song even sadder when talking about putting a show together. However, as a song it will remain the same and as this is my third iteration when it comes to talking PPV I expect there to be many more of them in years to come even if core boxing fans stop paying for them, as some have.

The success of a band such as Queen did not rely on the 20 or people who saw their first live show but the many, many people who bought their records once they became a “thing”. Like it or not, boxing is now a “thing”, a night our or night in that seems relatively cheap to some, exorbitant to others and there doesn’t seem to be a change on the horizon.

So how do we fix it? To answer a question with a question: What if this is something that, like politics, cannot be fixed and merely needs to pointed out? Can we really expect boxing, that most unromantic of sports when you peel back the layers to buck a societal trend? No, as the late, great Ennis Delmar said: “If you can’t fix it, you’ve got to stand it.” Or take a step back, the choice is your—that’s consumerism for you.

I read that what would once have been considered a proper Mars Bar is now the same size as what was once a Snack sized bar, with the current Snack sized ones being barely any bigger than the old Fun sized Mars bars. It makes me think of world titles, the fragmentation of which really got going in the 1930s and continued apace over many years until we have Super, World and other titles.

The fighters who hold them will still do so with a sense of pride, we all love a Mars bar after all, but more now than ever we need to keep sight of the men who have won, jettisoned and occasionally defended enough world belts to be considered the top dogs of their divisions or the sport.

For example, Andre Ward is the world’s best fighter, so who cares what he defends next time out? It is an idea that came back to life when Marco Antonio Barrera ditched all but his WBO belt in, arguing that people knew who he was and what he represented, only for people to still obsess over belts. Fans criticise them, but you would be treated like a war criminal if you confessed to not knowing who held what anymore or, God forbid, had to consult BoxRec.

Belts have become useless trivia items, some stand out in our minds whereas others slip in and out, so I’m just going to have a proper Yorkie Champion, the Man in a division regardless of what titles he has held or given up. So Ward is the Yorkie World light-heavyweight Champion; Tyson Fury holds the heavyweight World Yorkie belt—it’s not for girls—and so on.

As arbitrary designations go it is not too bad. Nor is it an insult, either, as I know that putting a title on the line can boost a fighter’s purse, and they want to put more than a reputation in there, they want money in it, so why not?