Out of Africa – The Tamuka Mucha story 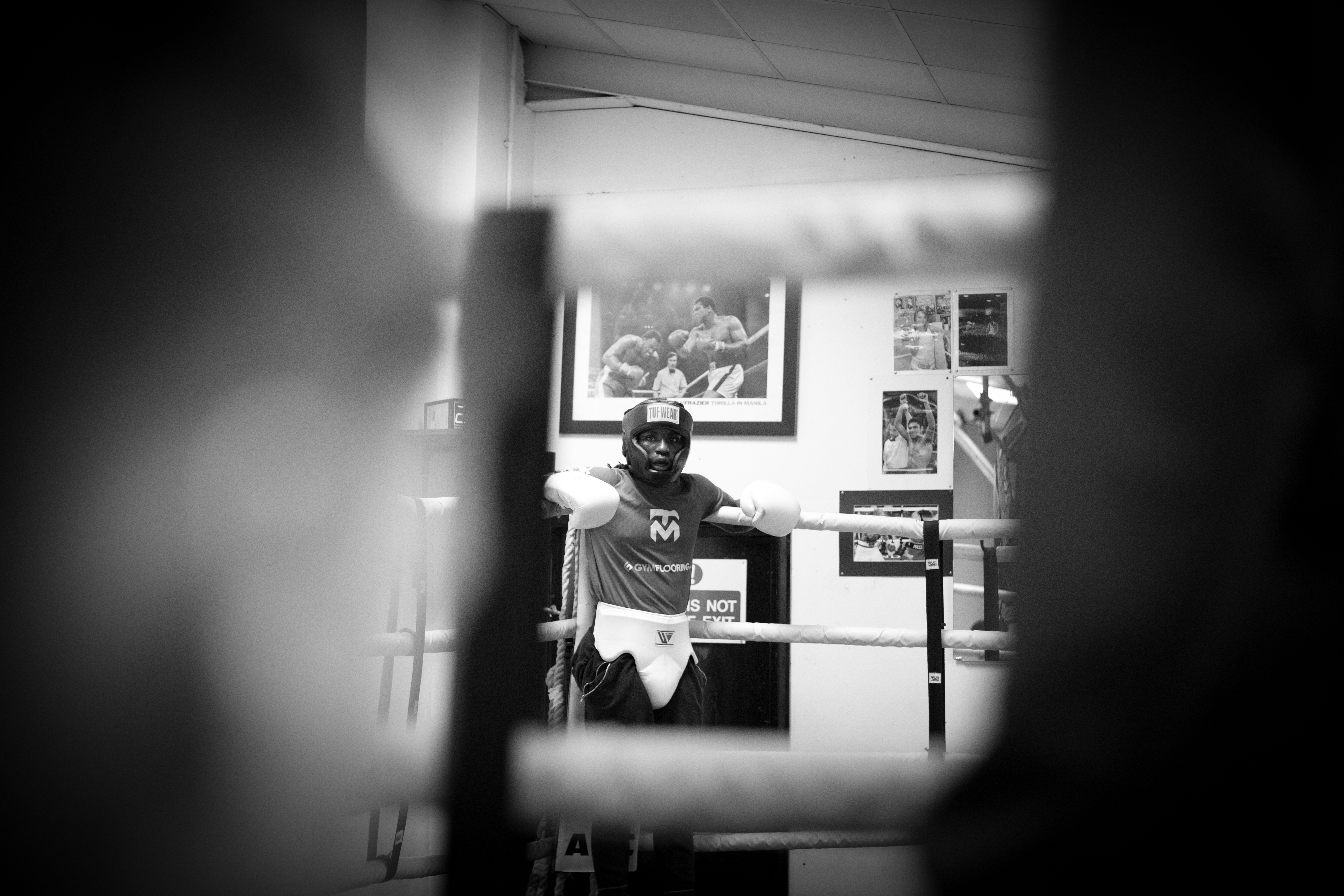 IT’S almost imperceptible. A white stream bisecting a coarse brown plain, a winding, bumpy road to redemption. At no more than two inches in length and situated just below his left ear, the faint scar – and the bullet wound that caused it – speak as much to Tamuka Mucha’s future as his past.

The 24-year-old welterweight prospect, a former national amateur champion and Southern Area titlist, wasn’t made in Reading, the historic Berkshire town he has called home for the best part of 13 years. Zimbabwe deserves both credit and shame, in equal measure. The son of a merchant and a nurse, Mucha’s is not entirely the stereotypical boxing backstory of hardship and pain; his upbringing was, in fact, distinctly middle class, at least for Harare in the 1990s. The Unity Accord had been signed in 1987 and the racial tension and division that defined much of the the previous decade had lessened its grip. The lengthy Rhodesian Bush War lingered like an open wound in the collective consciousness, but the rule of leader Robert Mugabe – whatever happened to him? – went largely unchallenged as the country was reborn.

Despite the signs of political growth, the Zimbabwean economy deteriorated as drought recurred and the country’s citizens toiled more in hope than expectation.  “I wouldn’t say we struggled,” Mucha reflects, with an incongruous hint of defiance. “Mum and dad always worked to provide for us, we didn’t grow up poor, but in the end time was getting tough for them.  “I was a naughty kid, I used to get into trouble a lot. One time my friends and I went into a field, we picked up some leftover bullets from the war, put them in the fire and pretended they were firecrackers, but we were actually shooting people. I got shot close to the jugular vein on the left side of my neck, but I survived.”

If only Mucha’s father had been so fortunate. Courageously railing against a tyrannical regime, Tamuka’s dad tried to afford his people a choice in the upcoming elections. The Army remained loyal to Mugabi and crippled a defenceless Mike Muchapondwa for his temerity in opposing the President. “They shot him in the back,” Tamuka reveals solemnly, just another injustice he has come to accept. “Anyone who protested would be physically harmed, he voted against voting for just one party and it led to him getting shot. It was awful, I found it quite difficult at a young age, I was so used to him walking, for a long time I didn’t understand why he was in a chair. I was still just eight years old when I realised it was a permanent thing; it was quite difficult to grasp. I was used to playing football with him, running around, getting lifted up by my dad and, suddenly, he could no longer use his legs. This is what it’s gonna be like for him forever.”

While his father had stayed behind and ultimately paid an immeasurable price for highlighting the ill wind blowing through his homeland, it was Mucha’s mother who first made the pivotal decision to emigrate. Citing declining living standards, she alighted on England as the most propitious place in which to gain the nursing qualifications she coveted, and slowly steer her family towards a better life. However, as is often the case, she was forced to make initial sacrifices before this admirable goal could become a reality.

“She left when I was about eight and I stayed with my grandmother and father, then me, my father and brother followed later,” Tamuka recalls. He still has a brother and sister back in Harare. “She chose England because she had quite a few friends already there and they had told her about the good opportunities over here. We settled in Reading because she had some friends already in Reading who helped her out. There are a few of ‘us’ in Reading. We are always supporting each other.”

If this had been a movie, Mucha’s story would either end here, his salvation having been achieved, or would progress to ever-greater joys. In the real world, however, a reserved, overweight 11-year-old boy was wrenched from all he had ever known and plunged, a conspicuous outsider, into the British school system; a daunting environment even for those accustomed to it. From the sidelines, the change appeared wholly positive, but Tamuka had skin in the game and no choice in his repatriation.

“I’d never even been on a plane, it was a whole different experience,” he remembers, with quiet contemplation, as if the scale of his relocation challenges him still. “I was quite confused at first, it was different – the people, the climate, the types of buildings, it took a few years to break me in. At one point, I actually wanted to go back, I didn’t think I was fitting in or adjusting well to the environment, I wasn’t making any friends in school. The main difference, apart from the weather, was the way people are secluded. Here most people spend their time inside their houses, but in Zimbabwe when you go to your area, you stay outside and people ask you a thousand questions. Outside in England people didn’t care about getting to know the people that had just moved into next door, they weren’t willing to engage with strangers.

“The transition was quite difficult, I was bullied at school and at one point, I used to stay at home. I didn’t know many people and I got really quite fat; I was almost 105kg by the time I was 16. I was already overweight then I came somewhere else, had a different accent, I’d say things differently and it made me an easy target. By the time I got into high school, everyone sort of knew each other. I never got fat in Zimbabwe because I’d be playing, running around regularly. When I first came here, the kids would stay home a lot, watch cartoons and play Playstation 2. I used to play it myself, from sun up to sun down, I got sort of involved in that culture, not getting outside, not engaging with people.”

A stranger in a strange land, Mucha was screaming out for a change of direction, something to help him shed excess weight while simultaneously bolstering his fractured confidence. From the periphery, the solution was obvious. Mucha’s high school days began painfully, but it was the John Madjeski Academy vice-principal that introduced Tamuka to the gym, and a burgeoning reinvention. This led Mucha first to a local fitness centre then, portentously, Reading Amateur Boxing Club. He excised almost 35kg in a year and his first title came at 67kgs. Following in boxing’s wake came the friendships he’d long craved and finally, gratefully, Tamuka Muchapondwa – the anglicised abbreviation came later – began to enjoy life in his adopted home. Even a GB final defeat to Antony Fowler, a fighter Tamuka had long admired, could not erode the strength and confidence instilled by the sport.

Tamuka, from the Shona dialect native to Zimbabwe, translates as ‘We are awake, aware, arisen.’ It could be argued that Mucha was truly none of those things before finding his vocation. The progress of Tamuka and his family, underlined by mum Olgah buying a house in Swindon three years ago, offers a welcome rebuttal to the widespread but often ill-informed concerns about UK immigration that have found partial expression in the rise of UKIP and the Brexit decision.

Genuine fear for the future of stretched public services has been manipulated in many cases by bigots with the same thinly veiled agenda – one that rapidly disintegrates at the feet of Mucha and his kin. ‘They come over here, they make their own money, they inspire those around them and purchase their own property,’ doesn’t resonate with the ignorant demographic quite as effectively as the usual propaganda, but it is arguably more representative.

Now 16-0 (4) and heading towards a British title shot – towards which the next waymarker is in Swindon on April 15 – Mucha retains that desire to forge ahead. He is trained by the estimable Trevor Francis and managed by the highly respected Sanigar team, but his determination is inspired by a key figure outside the gym.

“From watching my mother,” he declares with considerable pride. “There were times when things were difficult, she had to work hard and leave Zimbabwe, leave us behind; it was quite tough for her. Every time she would visit she would cry when she left and she had to do that multiple times in a year. That touched and influenced me greatly in my life, so I want to work that hard to build a better life for her, and work even harder to build a better life for my children one day, and my family back in Zimbabwe. She is one of the biggest influences in my life.”

Encouraged by such an impressive role model, Mucha will continue to strive, though he could become a world champion and still not be the most successful person in his family. I sense he wouldn’t want it any other way.