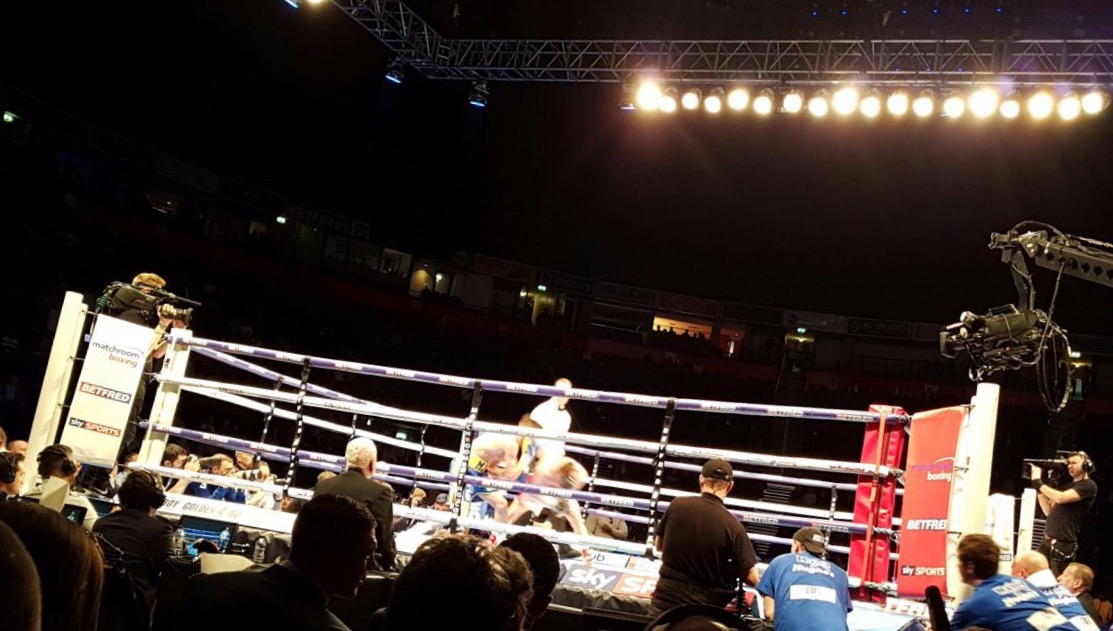 Reporting tonight from ringside at the Manchester Arena, where Anthony Crolla goes in against Jorge Linares again for the WBA, WBC Diamond and Ring Magazine lightweight titles.

There is a good undercard lined up: Here are the latest Results…

First up: Ben Sheedy delighted his army of fans by outpointing Rob Brown at middleweight. Sheedy is one of the biggest ticket sellers in the north west and is steadily improving. Brown came to fight but had no answer for Sheedy’s pace and aggressiveness. Sheedy – who trains out of Champs Camps in Manchester – ran out a comfortable 60-54 winner after six rounds and is now 6-0, 2 KO’s.

Hosea Burton, 180lbs, rebounded from his heartbreaking defeat to Frank Buglioni by Tamas Kozma. Burton – who surrendered his British light heavyweight title after a memorable brawl with the Londoner last December – rebuilt some confidence and put himself right back in line for an immediate rematch with Buglioni by dominating Kozma.

Burton recorded a knockdown in the third round but laboured as the boutique wore. Nonetheless, he recorded an 80-71 victory after eight rounds. Burton is now 19-1, 9 KO’s.

Nathan Wheatley, 159 1/4lbs, continues to impress. The Kieran Farrell trained middleweight faced Chris Jenkinson , 159 1/4lbs – as all northern fighters between 154lbs and 160lbs seem to – and boxed his way to a comfortable four round decision. Wheatley is rangy and has a slightly unusual hands down style and is clearly benefitting from some top sparring. The score was 40-36 and Wheatley is now 7-0.

The third fight between British super featherweight champion Martin Ward and Maxi Hughes produced one of those hard fought battles which make the British title so special.

Ward – a big prefight favourite – faced a grimly determined effort from the southpaw. Hughes has been sparring the elusive Kallum De’Ath in preparation for the fight and the experience of trying to pin down an elusive opponent paid off. He enjoyed plenty of success through the middle rounds but Ward’s cleaner shots seemed to have the final say in exchanges..

Hughes,16-3-2, 2 KO’S, seemed to be controlling the action during the middle rounds and scored with some nice counters but Ward’s superior ability began to tell as the bout wore on. Ward, 16-0-2, 8 KO’S, regained control as the fight entered the championship rounds and retained the title with a unanimous decision. The scores were 116-112, 118-11, 116-113.

Marcus Morrison, 159 1/4lbs and Jason Welborn, 159 1/4lbs, went to war and it was the unfancied Welborn who prevailed after ten brutal rounds.

Morrison has had things pretty much his own way since turning professional but was forced to fight his way through a torrid opening couple of rounds with Welborn. Although Morrison’s work was the classier, Welborn produced some determined work and bloodied the man from Hyde’s nose.

Welborn picked himself up off the floor during a back and forth second round and although his work rate slowed dramatically in the third with Morrison content to pick him off on the back foot, he picked up the pace again in the fourth and fifth with Morrison unable to get out of the way of some flush hooks. The sixth was a real ordeal for Morrison as he looked on the verge of coming apart of the seams his face a bloody mess.

No matter what Welborn threw at him, Morrison just would not quit. He always managed to throw just enough leather back in Welborn’s direction to prevent the fight being stopped.

Morrison should be commended for his courage but despite rallying in the ninth when he managed to get behind his jab, he was simply out-fought.

Katie Taylor was given a decent workout by Bulgaria’s Milena Koleva, 132 1/4lbs. Taylor, 134 1/2lbs, has barely shifted out of second gear since turning professional to great fanfare but although she once again found herself in a different league to her opponent, she was forced to work for her openings. A left hook dropped Kileva in round seven but she dragged herself up.

Taylor is now 4-0, 2 KO’s and the problem still remains on how to match her.

After a fractious build up, the Blackpool grudge match between Brian Rose, 159 1/2lbs, and Jack Arnfield, 158 1/2lbs, failed to ignite.

With both known mainly for their economical, upright styles, the fight was crying out for one man to break rank and take a risk Neither was willing. The fight settled into a jabbing contest. Rose would fire in the occasional counter right hand and Arnfield was able to put together the odd burst but on the whole, it was poor fare.

After twelve rounds, the fight predictably went to the cards where Arnfield was awarded a unanimous decision.

Lawrence Okolie , 201 1/4lbs, made a successful entry into the professional ranks by blasting out Brazilian born Londoner Geoffrey Cave, 195lbs, in . Okolie – who represented Team GB at Rio 2016 – found his mark instantly.

2010 Commonwealth Games gold medallist Sean McGoldrick, 119 1/4lbs, made his professional debut with a one sided victory over Brett Fidoe, one of the sports busiest fighters.

Tomi Tatham, 182 1/4 lbs, got a taste of the big stage and came a way with a win over Karel Horejsek, 184 1/2lbs. Tatham had initially been scheduled to take on Liam Conroy but a cut suffered by Conroy in a recent bout meant Tatham had to be content with a marking time fight.

Tatham moves on to 12-1, 5 KO’sBEFORE and will hope the conroy fight can be salvaged.