Dillian Whyte will take on Mariusz Wach next 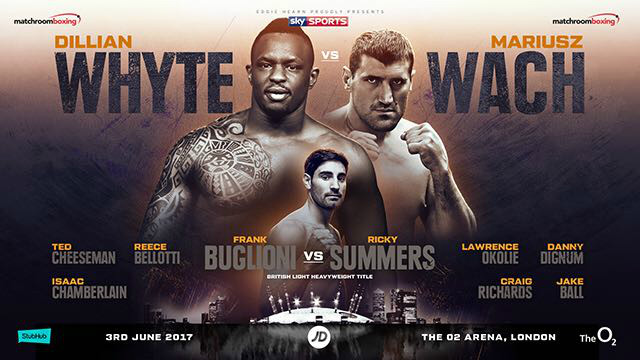 WHYTE FACES WACH IN HEAVYWEIGHT CRUNCH CLASH AT THE O2

Dillian Whyte returns to action in a crunch Heavyweight clash with Mariusz Wach at The O2 in London on June 3, live on Sky Sports.

Whyte is back in the saddle after his epic battle with Dereck Chisora in December in Manchester, with the London pair going toe-to-toe over 12 exhilarating rounds that Whyte claimed via split decision.

‘The Bodysnatcher’ now steps up his pursuit of World honours in the capital against Wach, the Pole that took Wladimir Klitschko the distance for four World titles in 2012 and is ranked at number seven in the WBC and 14 in the IBF – and the 29 year old is planning to put in a performance that makes puts the World champions on red alert.

“I’m super excited to be headlining at The O2,” said Whyte. “I’ve being working hard to be a standalone headline fighter and to headline against someone of the stature of Mariusz Wach is great.

“He’s a good fighter. Tall and rangy and he throws a lot of body punches and uppercuts. He’s Polish so of course he’s going to be tough and bring that warrior spirit.

“He’s a tough guy so I’ll have to work hard. I believe I have what it takes, the resilience, tenacity, skills and heart to beat him. Possibly a stoppage if I apply the right game plan.

“He’ll come to fight, use his range. It is Heavyweight boxing – you can’t guess what these fighters are thinking. You have to prepare for all outcomes.

“He’s challenged for a World title and he’s the man who gave Klitschko problems and put up a good fight against Alexander Povetkin too – two of the best fighters we’ve had in the past 10 years. It shows how tough he is. He just beat Erkan Teper as well so it’s a very tough test.

“After my last fight, I could have fought Chisora again but I want to move onwards and upwards and I believe this is a couple of levels above Chisora.

“I want to fight for a World title in the next year. I’m in a good position to be in with my rankings but I know that Wach is a dangerous customer and can ruin my dreams, so I have to be at my very best and take him out in style to prove I mean business at the top level.”

There’s a stacked card in support of Whyte’s clash with Wach, led by British Light-Heavyweight champion Frank Buglioni defending his title for the first time against Ricky Summers. Buglioni was set to defend his belt against the unbeaten Tipton man in Greenwich in March on the undercard of Tony Bellew’s epic win over David Haye, but injury forced him to postpone. Buglioni puts the belt on the line for the first time since ripping it from Hosea Burton in a dramatic 12th round stoppage win in Manchester in December.

Tickets go on sale to Fight Pass members at 10am on Thursday 20th April via www.stubhub.co.uk

Face value tickets for June 3 are also be available from http://www.stubhub.co.uk/matchroom-boxing-tickets/ . StubHub is the official ticket partner and marketplace of Matchroom Boxing and Anthony Joshua.