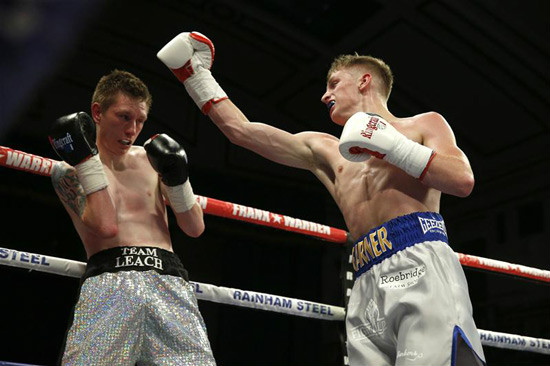 British boxing is booming so strongly at the moment that it is nearly impossible to keep track of all the prospects emerging from the woodwork. No sooner has one blockbuster event showcased various upcoming talents than the following weekend is suddenly upon us, with the next instalment of action and another swathe of promising boxers hoping to catch the public’s eye. Luckily, boxing is undeniably re-asserting itself on the sporting main stage, and is thus providing many platforms for the younger athletes to impress upon.

If you watched the recent Josh Warrington – Kiko Martinez undercard, you might have made a note of upcoming super featherweight Ryan Garner, who turned in a classy and high action performance in defeating teak-tough Nicaraguan Rafael Castillo. Despite being taken the distance for the first time in his pro career, Garner, who is nicknamed ‘The Piranha’ showed real ring intelligence to dominate every area of a fight that could have easily ended in the first round were in not for the resilience of his opposition.

“He was tough, he had a good chin on him,” admitted Garner. “I rocked him loads, and in the first [round] I was hitting him with good body shots as well. I’ve put people down with less harder shots… he’s a durable opponent, but that’s what [I] need.”

Realising that Castillo wasn’t to be so swiftly dismissed, Garner adapted accordingly, moving in and out of range and picking his shots well, before boxing on the back foot to seal the win.

“When I came back into the corner [after the first round] they were all saying ‘box him more’, so I had to adapt. When I started using my jab I started snapping his head back, and I think that worked really well.”

Despite only 5 professional contests, there are good reasons why people are quietly excited by the 19 year old. For starters, he amassed a praiseworthy 45-15 amateur record, which includes a European gold as a junior, a quarter finals spot at the junior World Championships, and 19 appearances in the England vest. There were rumours of him being considered for consideration for the 2020 Olympics, a move he decided against. “I’ve always wanted to [be a pro] as my style is more suited [to that]. I would be 22 by the time the next Olympics comes around and I’m not waiting that long. As soon as I turned 18 I wanted to turn over.”

This style, a good mix of high work rate and refined boxing skills, has certainly worked thus far, and it may mean there is a bigger share of exposure coming his way in the future. “It was a great spot on BT Sport for Ryan [against Castillo],” says Alfie Warren (nephew to promoter Frank).

“A prime time spot… [in the future] I honestly do think he can become a superstar. I think he can emulate in Southampton what Josh Warrington has done up here [in Leeds]. If Joe Pigford does the business against Aarron Morgan, you’ve got two stars down there who can put Southampton firmly on the map of boxing.”

While that may be true, Garner has his work cut out for him in one of the UK’s most crowded divisions. Super-featherweight is positively crammed with talent, boasting two recent world title challengers as well as a string of undefeated fighters. Martin Joseph Ward, Zelfa Barrett, Sam Bowen and Anthony Cacace are but a few of the boxers with their ‘0’s still intact, while others like Liam Walsh and Stephen Smith will want to prove they are still the domestic bosses at 130lbs regardless of their recent losses.

And Garner is preparing for them. “I want to get to the titles as soon as possible. I want to stay active all the time. I feel good and have been holding my own with British champions in sparring. Because of my age it gives me time to build, but I don’t want to hang around too long. People will stop coming to watch you if you fight bums who don’t fight back all the time.”

Garner could indeed be one to keep a very close eye on. Expect him to close the year out with two or three ‘keep busy’ fights, with a Southern Area title shot waiting for him early next year should he win them. Win the Southern Area belt, and options will really start opening up for the youngster. The domestic super-featherweight division isn’t far from producing a series of really exciting matches, and when they happen, expect Ryan Garner to be at the very heart of them.