Bradley Saunders ensuring he leaves boxing with no regrets 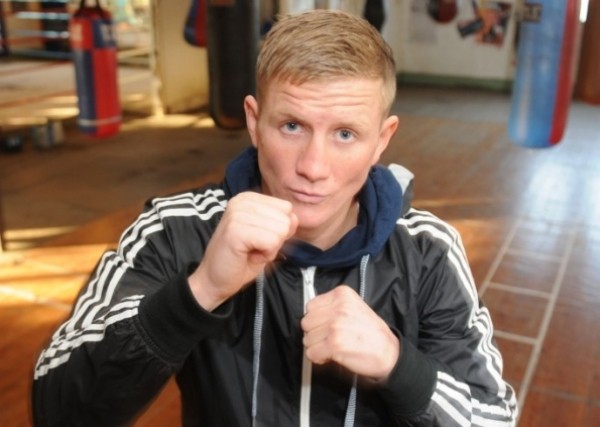 It has been nearly two years since Sedgefield’s Super Lightweight Bradley Saunders was last in the ring; it was in his now ironically unlucky 13th bout that he was disqualified against recent Frankie Gavin opponent Renald Garrido. Now, healed and ready to go, Bradley is going to give boxing one more shot to see if he can put his unfortunate injuries behind him and deliver on what was once a highly anticipated professional career.

For Bradley, the fight with Garrido was just the wrong fight at the wrong time, and after a tricky start to the affair, things only got worse; ‘I broke my left hand in the 3rd round, and then the 4th round I ruptured all the tendons and ligaments in my right’, he went on to explain ‘That (the right hand) was worse, as I couldn’t make a fist, I couldn’t do anything, It was like playing football with 2 broken feet. I had to have my right hand fully rebuilt with bone from my hips’.

‘Why now?’ is probably the question that Saunders has heard the most since his return was announced, but the answer is very simple – the 31 year old is ensuring he grows older with no regrets. ‘I’ve boxed since being a kid, since 8 years old, I love the sport, but I just stayed amateur far too long, too many amateur fights (around 230). The injuries have just laid me off, but I don’t want to live my life with any regrets. I’m very happy with what I’ve done so far to be honest. I could quite happily retire now, never box again and be proud of what I’ve done, but I just don’t want to get to a certain age and just wish I’d had a few more fights’ he said.

As of right now, his hands are feeling perfectly fine, but Bradley admits he won’t know for sure until he gets in the ring and does it properly. ‘They feel brilliant; maybe this is just what I needed. It’s been nice being normal, eating what I’ve wanted, going out for a meal with my wife and having a glass of wine, going out with the lads in the week and just being a normal person’, but he adds ‘I suppose I’m not really normal because I can’t keep doing it, I just keep thinking about boxing!’.

By 30th June, the picture should be a lot clearer as the former WBO Inter-Continental Champion explains that he has a busy schedule coming up; ‘I’ve got 2 fights you know, 23rd June in Newcastle and then a week later in Glasgow. So I’ll definitely test my hands’. Although an opponent is yet to be confirmed, nobody is expecting a world beater to be in the opposite corner, but a foe that will put up just enough of a fight for his hands to be truly tested would be the perfect candidate.

In terms of where the fight is taking place, it’s clear that there is no better place for Saunders to be fighting, and it’s clearer that his fans haven’t forgotten about their man; ‘They couldn’t give me enough tickets, I’ve had 250 and they went in the first week! I’ve gotta go and deliver them tomorrow. It’s made it a lot easier having my support still there, as soon as I said I was fighting again, everyone’s jumped on to me. I could have sold every single ringside seat, and a lot more, but Matchroom couldn’t give me any more, they had to give everyone else their lot of tickets’ he explained gleefully.

During his time out of the ring, Bradley feels several things have changed ahead of his comeback; ‘I’ve matured a lot – I’m not old, I’m 31, and not an old 31. I’ve had a very short lifespan as a professional, with a massive one as an amateur, but I’ve not got much wear and tear on me in terms of tough fights. I think as I’ve matured as a person, I’m listening more, so I’m taking more in now. I’ve been watching other people now, which I never used to do’, before reflecting ‘I was never really a man for boxing, I just tended to be pretty good at it. I know it’s my last crack of the whip now, I just hope I have a good one’.

It seems Saunders isn’t setting himself any aspirations in stone ahead of his return to boxing, previous injuries have left him wary of doing so, and so he is simply hoping that this time, things finally go his way. ‘I’m just gonna fight and see where I end up. I’ll fight anybody; I’ve always said I’ll fight anybody’ he said. The Super-Lightweight scene is booming domestically (with the likes of Ricky Burns, Jack Catterall, Robbie Davies Jr, Ohara Davies, Josh Taylor, Tyrone Nurse and Tommy Coyle to name a few) and Bradley insists ‘I don’t think anyone in Britain could beat me’, and why should he? Saunders boasts one of the most decorated amateur records that this country has seen, winning a Silver medal at the 2010 Commonwealth Games, Gold at the 2009 EU Championships and Bronze at the 2007 World Championships, plus collecting 12 national titles.

To echo the tone of what has previously been mentioned, the County Durham boxer concludes by repeating ‘It’s just about having no regrets in life, if my hands go again then I can call it a day, if they don’t then I can just crack on’ and we can only hope that things work out as planned. In what is already an exciting division domestically, it would be great to have another name in the mix.

Saunders completes his comeback on June 23rd as part of the undercard to Matchroom Boxing’s NXTGEN show, topped by Josh Kelly at the Walker Dome in Newcastle.