‘Battle of the Baggies!’ Langford vs Welborn – West Brom Derby for the for British title 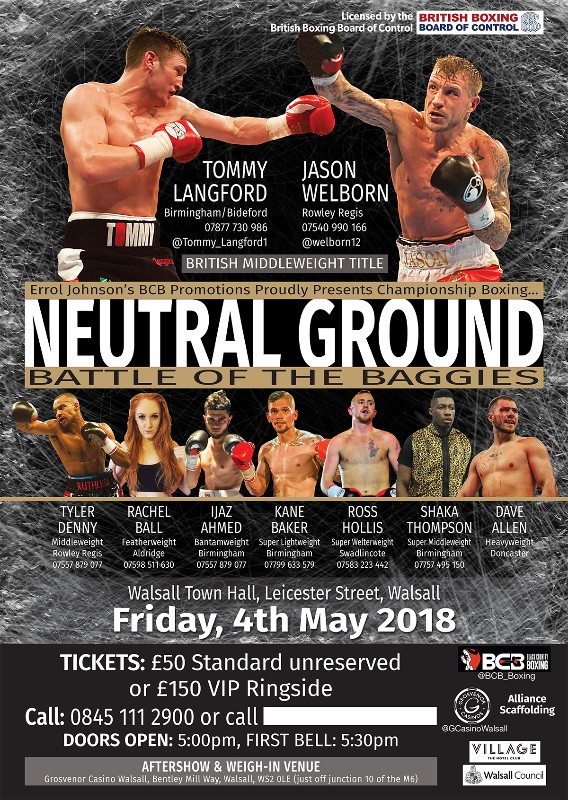 Langford defended the Crown he won when he defeated Sam Sheedy (back in November 2016) earlier this year as he recorded a unanimous points victory over Jack Arnfield. This will be his second defence off the Lord Lonsdale belt and his first fight in the Black Country since 2015.

Welborn is himself coming off the back of a career-best victory over Marcus Morrison. The 31 year-old beat the previously unbeaten prospect to claim the WBC International Silver Middleweight Title and enjoyed a keep-busy fight, routine win over Cristian Hoskin-Gomez at the tail end of last year.

It’s an intriguing contest between two local fighters who are ranked third and fourteenth in the Country respectively.

“This is a proper fight,” explained BCB Promotions’ Head of Boxing, Errol Johnson. “It has everything. There is the British Title on the line between two of the country’s best middleweights. On top of that, Tommy resides in Birmingham and Jason is a Black Country lad, so there’s that rivalry along with the fact they’re both Albion fans. There will be some atmosphere in the Town Hall next month!”

A stacked undercard for Neutral Ground has also been confirmed.

Chief Support is Doncaster Heavyweight, and Twitter sensation, Dave Allen. The 26 year-old has fought the likes of Dillian Whyte and Luis Ortiz and is coming off the back of a technical draw in his rematch with Lenroy Thomas for the Commonwealth Heavyweight Title.

Walsall’s female featherweight sensation, Rachel Ball, is also in action. The former world kickboxing champion will be looking to make it a hat-trick of win since turning over to professional boxing late last year.

The weigh-in and after show party will take place at Grosvenor Casino Walsall, Bentley Mill Drive, Walsall (just off junction 10 of the M6).