Tommy Langford: ‘The Eubanks have disrespected me, the sport and the fans!’ 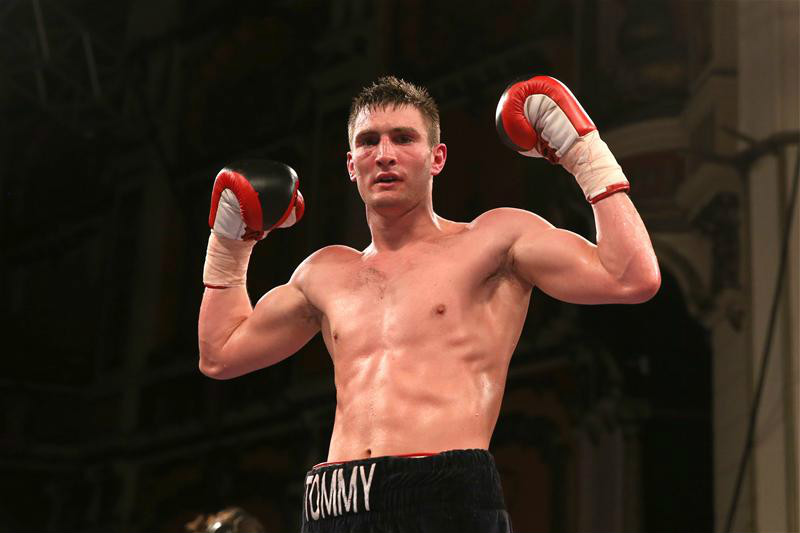 Devon’s Tommy Langford (17-0, 6 KOs) has used his column in the North Devon Journal to blast Chris Eubank Junior following the British middleweight Champion’s decision to vacate his crown and move on to other things.

Langford was due to meet Eubank in Cardiff on October 22, but will now have to wait on news of a challenge for the vacant crown. Writing in his ‘Fighting Talk’ column, Langford laid into Team Eubank and poured scorn on news of Eubank’s tennis elbow injury:

‘It was an eventful weekend for me after hearing Chris Eubank Jr had pulled out of our fight.

‘My manager, Jay McClory, was informed by the official British Boxing Board of Control (BBBofC) doctor that he had tennis elbow, although the media have reported it as a severe injury after sparring a 14-stone opponent.

‘I still expect to fight for the British title—which is now vacant—on the same October 22 show in Cardiff.

‘If I can’t fight for the British then I will fight for another major title, so the huge number of people who have bought tickets—for which I can’t thank you all enough—will still see me fight.

‘Everybody has been supportive and understand the Eubanks have been disrespectful to the sport and fans.

‘Tennis elbow is an overuse injury which has nothing to do with a 14-stone sparring partner as it doesn’t happen in one shot. It’s easily treated with physio and doesn’t inhibit you when you get the right treatment.

‘I don’t believe he ever wanted to fight me. He said when I was made mandatory challenger it was not a fight they wanted but a fight they had been told to take by the BBBofC.

‘The day after Frank Warren won the purse bids to stage the fight, the Eubanks were calling out Martin Murray.

‘As soon as the fight was signed and sealed for October 22, my amazing support bought more than 2,000 tickets within 10 days. But, the following day, Eubank Sr started calling out the WBO world champion Billy Joe Saunders.

‘I stayed quiet and knuckled down in my training camp. I just thought it was typical Eubank behaviour, trying to get publicity.

‘There were four press conferences, I agreed to attend but the Eubanks declined them all. Eventually, Frank Warren’s lawyer sent a written warning about how they could be penalised if they didn’t cooperate with promotions for the fight.

‘Then Junior began to call out Gennady Golovkin after his win over Kell Brook and made that statement about how his corner don’t own towels. I found that very disrespectful to Kell who sustained a very serious injury—a broken eye socket—which could have affected his long-term vision badly. It’s not something to joke about.

‘He told Kell Brook to be a man but then pulled out of a fight with tennis elbow. If you are a true boxing champion, you should fight your challengers.

‘When I went to Brighton to spar Junior more than 18 months ago I handled myself very well, to the point where I was on a list of boxers sent to Frank Warren who they didn’t wish to fight.

‘Other opposition have stood in front of Junior to be hit and my style was something they wanted nothing to do with.

‘The Eubanks claimed the Lonsdale Belt was special to them and they wanted to win it outright. Now they have vacated the title, it proves they didn’t want the risk of fighting me.

‘I was confident I could use my strengths to exploit his weaknesses. I prepared in the best way possible, gave my all in training and paid many expenses out.

‘I have never trash talked and have done everything in the right fashion—so for this to happen is so disrespectful.

‘They overlook fighters and claim to be far superior to domestic boxers yet have never won a world title. They have no regard for fans, promoters, opponents and the sport in general.

‘I don’t want anything to do with them after this and they have lost their opportunity with me. They will never win anything I will want, so it will be them that will want something from me and I will refuse to give it to them.

‘This is the last thing I will say about the Eubanks as they don’t deserve the column inches.

‘The fans should turn their backs on them. They crave the attention so much so don’t give it to them, let them disappear to America because British boxing doesn’t need them.

‘Thankfully, I have great fans, family, friends and a top trainer around me who have kept me positive all the way through this debacle.

‘Believe me, my mind is fully focused on whatever is put in front of me on October 22.

‘The Eubanks are done as far as I’m concerned—they are in the rear view mirror.’