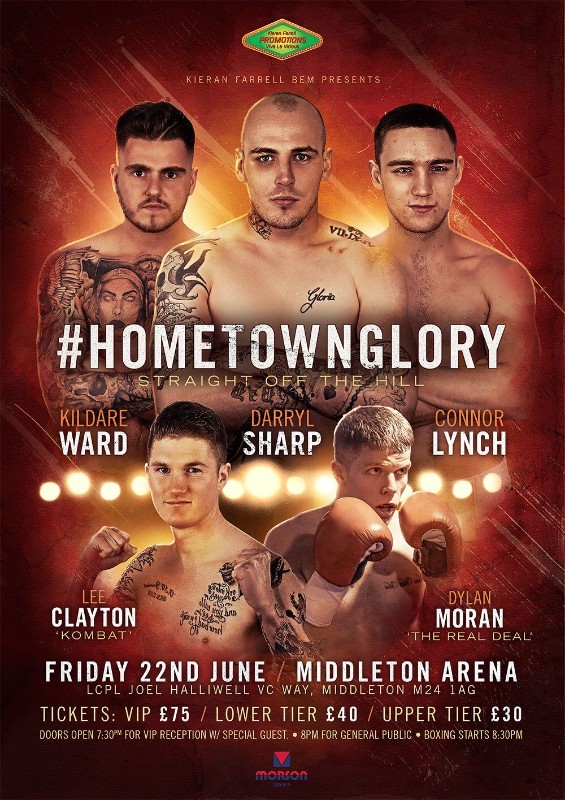 After a very busy start to 2018 boxing Promoter, Manager and Trainer Kieran Farrell BEM doesn’t intend on slowing down or taking a break. Almost two years to the day since his first Promotion Kieran is bringing boxing back to where it all began, the Middleton Arena. Hometown Glory will be an event stacked with local talent, scheduled for June 22nd 2018.

Teak Tough former Central Area Middleweight Champion Darryl Sharp will make a welcome return to his home turf after a number of fights on the road. Moving up to Super Middleweight he is scheduled to face experienced Yorkshireman Harry Mathews in what is sure to be an action packed bout.

Fellow locals Connor Lynch and Kildare Ward are also on the card with Lynch looking to add another win to his record in his second outing and Ward looking forward to his professional debut. The atmosphere will be electric in what is certain to be a sell-out crowd once again at the Middleton Arena.

Also on the bill Heywood local ‘Kombat’ Lee Clayton will look to extend his 4 fight winning streak in a scheduled 4 round bout against Ricky Leach ahead of targeting an Area title later in the year.

Irishman Dylan ‘The Real Deal’ Moran continues his explosive start to the professional ranks in his first six round bout against the durable James Gorman.

Last but not least, another exciting addition to the show is former Team GB and England boxer Stacey Copeland. Unbeaten in 4 fights so far she will be looking to continue her exciting start to the professional ranks.

Tickets for the well-matched show are already flying out in what will be an exciting night of boxing in a packed Middleton Arena. VIP ticket holders will be treated to a pre-fight reception with a very special guest (TBC), with boxing set to commence at 8.30 PM.

Tickets can be reserved by contacting Kieran Farrell or any of the boxers directly. – Twitter: @KFTHEPEOPLESGYM