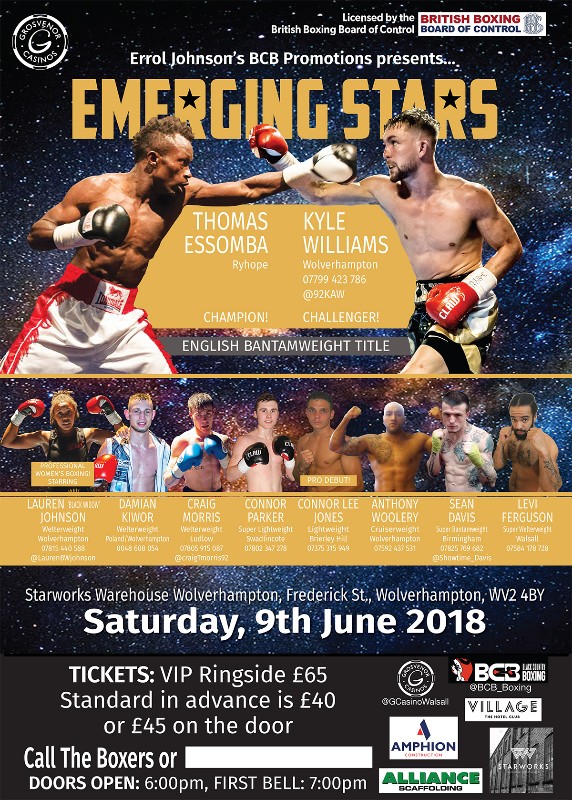 Williams: “The Pressure Is All On Essomba”

Kyle Williams reckons the pressure is all on Thomas Essomba as the two prepare to do battle for the English bantamweight title.

The hometown hero is the challenger to defending champion Essomba’s crown at Starworks Warehouse in Wolverhampton on Saturday June 9.

The two headline promoter Errol Johnson’s first BCB Boxing offering at the venue, on a show which has been dubbed ‘Emerging Stars.’

Midlands boss Williams steps up to national level for an intriguing 10-round main event against Essomba, a Cameroon-born opponent of pedigree.

Tyne and Wear based Essomba, aged 30, represented his country at the 2008 and 2012 Olympic Games before turning pro.

His eight victories have included three TKOs, two in title fights starting with a spectacular first round stoppage of Waleed Din for Commonwealth flyweight honours.

Stepping up two divisions has landed him the English strap, his power travelling with him after a devastating body punched finished Louis Norman in six rounds.

His three defeats have come to formidable opposition and he took Jay Harris, Iain Butcher and Yoan Boyeaux the distance, the latter in France on his pro bow.

Unbeaten Williams mirrors him with eight wins and three TKOs, but has no blips of any kind on his record since switching sports from kickboxing two years ago.

The second dan black belt teaches children, teenagers and adults at the same venue where he first learned his own skills since the age of six.

He went to the top table in kickboxing, winning the ICO world featherweight title, and sees parallels between the man he beat, Ivan Freidenberg, and Essomba.

Williams said: “To be bringing big time boxing back to Wolverhampton is a massive honour and a dream come true. I’m really looking forward to it.

“I can’t overlook Essomba, the guy has been to the Olympics twice, he’s been in there with some of the best and only lost to really good fighters.

“He’s coming off a great stoppage against Louis, who I know well, so he’ll be full of confidence. It’s not going to be an easy night’s work, but I’m confident I can do it.

“You are only as good as your last performance, it was a great display to become Midlands champion but I’ve moved on now.

“We’ve put a tremendous game-plan together, which we are working on every single day. I know he’s got the title, but my mindset is that he’s got to come and beat me.

“He reminds me of the opponent I won my world kickboxing title against, he was short and stocky and outweighed me massively on the day, which I expect Thomas to do.

“I’m concentrating on how I’ve got to perform. I’ve showed already I’ve got levels to my game, but I’m going to have to pull out everything in this fight.”

Welborn took Langford’s strap on a points split decision after a compelling 12-round war and now it’s Williams’ turn to try and being more belts home.

He said: “It’s a massive night for me and BCB. There’s a bit of momentum now the camp is on a tremendous run of form.

“What Jason has done is great for the gym, I’ve trained alongside him and seeing him push himself has helped me along. It’s definitely inspired me.”

Others fighting out of Wolverhampton elsewhere on the card is female fighter Lauren Johnson and Antony Woolery, with Polish powerhouse Damion Kiwior also based in the city.

Connor Jones’ time is finally about to come in the paid code, with the Dudley debutant’s bow delayed from last year.

IBO Continental and former area champion Craig Morris makes the trip from Ludlow in Shropshire to occupy the home corner, while Connor Parker travels from Derbyshire.

Sean Davis and Levi Ferguson have also been added.